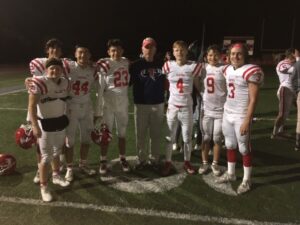 Spanish teacher will head to Connecticut next

The loud exclamation traveled through the 500s wing, immediately followed by the blare from a rubber horn. Although this series of sounds might have sounded annoying to random hallway passerbys, for many past and current students in Bret Yeilding’s Spanish classes, this lively greeting was a familiar and welcome indicator of the beginning of class.

Following a long career in education, Yeilding will retire at the end of the school year to move to Connecticut, where he will be near his significant other and her family.

Prior to his time at SHS, Yeilding taught for 15 years at different high schools around California. His first teaching job, which he tackled fresh out of college in 1983, was at Bullard High School in Fresno.

After 13 years at Bullard, he moved back to the Bay Area and taught at Leigh High School for three years before coming to SHS.

Here, Yeilding became popular among students for his charismatic and engaging teaching style.

Sophomore Bella Lin, who is currently a student in Yeilding’s Spanish 3 class, said that he is one of her favorite foreign language teachers because of the way he interacts with his students.

“Sr. Yeilding always made class really fun and comfortable, and he always made us laugh,” Lin said. “Overall, Sr. Yeilding runs his class in a fun way, encouraging all of us to speak loudly and confidently.”

This type of student response is a result of Yeilding’s teaching philosophy of teaching how he would want to be taught as a student.

“I had a great teacher at De Anza, who was super funny. People would come and watch his class even if they weren’t enrolled,” Yeilding said. “All the stuff he said really stuck with us because he enjoyed it so much.”

Aside from being involved in the realm of academics, Yeilding also plays an active role in the school’s sports program.

For 10 years, Yeilding was the head coach of the girls’ varsity basketball team, leading the teams to numerous wins and league championships. In 2013, he became the football team’s defensive coordinator.

Yeilding said that engaging in the athletic sphere of SHS has helped him see a valuable and rare side of  students that most teachers wouldn’t be able to see.

“A few years ago, we played Palo Alto in the playoff game. We won a really close game and it was really exciting,” Yeilding said. “At the end, the Saratoga students just rushed the field. I’ve never been around anything like that.”

Junior Nathan Murthy, a student in Yeilding’s Spanish 3 class and a football player, said that having Yeilding as both a teacher and a coach has been a fun and enriching experience.

“With him being a teacher and a coach, it is definitely a different experience as opposed to other students’,” Murthy said. “I feel as if I am more able to talk to him, and I also understand that he just wants you to succeed.”

Yeilding said that being a coach helped him develop stronger relationships with students.

Murthy said he is going to miss Yeilding a lot.

“I will miss his enthusiasm and comedic relief in class and on the football field,” Murthy said. “I will also miss having him around because he always wanted to make the people around him feel better and be better.”

When asked if he had any parting words for the Saratoga community, Yeilding had an immediate answer full of his typical humor.

“I can’t believe that Mr. Ellis and Mr. Torrens won the Teacher of the Year and I never did,” he joked.