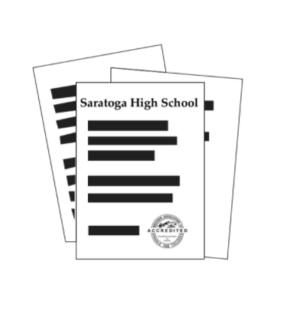 By March, the school was finished with its two-year self-study process and ready for a visitation from a Western Association of Schools and Colleges assessment team. Schedules, itineraries, detailed plans for meetings and hotel reservations had all been set up for the four-day visitation to start on March 22. It would have been like putting a bow on a nicely wrapped package.

Then, Santa Clara County went into shelter-in-place on March 16, and all the plans and visitations were canceled.

“If shelter-in-place hadn’t happened, we would now be done,” said English teacher Amy Keys, who is serving as the school’s WASC coordinator. “[Principal Greg] Louie, [assistant principal Kerry] Mohnike and I spent quite a bit of time trying to come up with some sort of plan to have some of the required meetings over the summer so that our already constricted teaching and learning time during the fall remote learning schedule wouldn't be too impacted.”

In addition to WASC being put on hold, the chairman of the WASC committee fell ill with COVID-19. After he dropped out, the school started working with a new chair, but a short way into the work, which had shifted online, he dropped out as well as he was not ready to do the meetings virtually. According to Keys, the school is still waiting to be assigned a new chair for the committee.

Just as school and classes have shifted to an online format, WASC also has adapted. The WASC board decided that all visits this year — both those that were planned for this year and those that are makeups from last year — will be virtual.

The schedule for virtual visits will include planned meetings and drop-ins during synchronous classes. The WASC board is also requiring videos for visiting committees to watch so that they can get a fuller sense of the school.

This year, most of the work with WASC is being carried out by Mohnike, as Keys’s two-year term as the WASC coordinator has finished. Still, Keys helps out when she can to ease the setup and execution of the virtual visits. Last year, she coordinated with WASC to create a virtual visitation schedule and start putting things into place for the online shift as soon as the shelter-in-place was ordered.

“We've really been ahead of the workload,” Mohnike said. “I think the teaching staff in particular is really focused on getting the classes well-organized and well-run. It's a little bit extra work but not a heck of a lot more than we thought we had to do.”

This semester, the school is focusing on reacquainting the WASC assessment team with the report they wrote a year ago and figuring out what the school’s areas of strength and growth are.

In addition to finishing everything that was put on hold last year, the school also has to consider how COVID-19 and the new reality of school factors in. According to Mohnike, they are now turning their attention into improving teaching and learning practices during the first three phases of the reopening plan.

“I believe we will get out of it what we put into it,” Mohnike said. “The whole process is designed for us to look at our school and decide as a group of stakeholders what we need or want to do. Then, we can put a plan in place with benchmarks to make sure we achieve our stated goals.”

The school’s WASC committee expects the visitors to find much to comment.

“We hope that the visiting committee gets a thorough sense of what a committed, passionate staff and student body we have here at SHS,” Keys said. “We hope that they are justifiably impressed with the way we've all come together and are supporting each other to continue to teach and learn innovatively, while developing community and finding resilience as individuals and even more, as a team.”