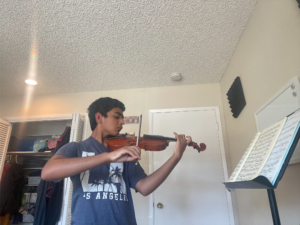 From the spacious music building to the McAfee Center, Saratoga High is home to one of the best public high school music programs in the U.S., and is also ranked in the top 2% of all California high schools in academic performance. The school — a training ground for excellent musicians and scholars — is proof that there is a positive correlation between studying music and high academic achievement.

Since the 1900s, research has shown a significant link between music and mathematics. Learning music activates portions of the brain used in spatial-temporal reasoning — the ability to form mental images and perceive physical objects. Music itself boils down to visual and auditory patterns, time signatures and formulaic progressions. Students gain intuition, imagination and problem-solving abilities essential for solving complex math and science problems.

Peter Gouzouasis, PhD, of the University of British Columbia, proved that music students actually see higher performance in all academic subjects. Gouzouasis studied over 112,000 high school student records and concluded that students in orchestra, concert band, conservatory piano, jazz band, concert choir or vocal jazz were the equivalent of one academic year ahead of their peers in English, math and science skills.

Student musicians that The Falcon interviewed affirm that their years of music studies have benefited them in their everyday academic work.

“I have to constantly memorize things like fingerings and long pieces,” she said. “That’s trained my brain to grasp new pieces of information under short notice.”

Lee added that music made her a more patient learner. Her studying routines parallel her music practice routines, with 20 to 30 minutes of studying and brief breaks in between. She also noted that her years of performance experience have come to benefit her in the classroom.

“Before I take tests, I use the same techniques I use for music auditions,” Lee said. “I often do breathing exercises or stretching to relax.”

Junior Tejas Tirthapura plays three instruments: the viola, violin and marimba. Tirthapura currently serves as the principal violist in the Saratoga Symphony Orchestra (SSO), was a past violinist in SSO and a marimba player for the marching band.

“Thanks to music practice, I know how to differentiate my strengths and weaknesses and then target my weaknesses,” Tirthapura said. “I break anything I don’t understand into manageable chunks.”

On the flip side, both musicians noted that there’s a trade-off for students who learn music at a high-achieving level. While playing music provides them with cognitive benefits, they must juggle practice time with study time.

“Some days, it feels like I have to choose between studying and practicing clarinet,” Lee said. “Cramming both into my after-school  schedule can mean I don’t get the best productivity out of either activity.”

Aside from daily after-school rehearsals, the fall marching band schedule involves a whopping 12 hours of time commitment on Saturdays. Over time, after adjusting to her rehearsal schedules, Lee said she has achieved a better balance.

In Tirthapura’s case, involvement in multiple music programs calls for back-to-back rehearsals on school days and a rigorous music life.

“There were times when I stayed at the music building after school until 10 p.m. teaching lessons for MESH (Music Education with Saratoga High), rehearsing in SSO, rehearsing in marching band and then doing my homework,” Tirthapura said.

With this packed schedule, Tirthapura said it is difficult to achieve success in all his instruments, especially with the AP and honors courses he is now taking as a junior. Although he is still figuring out how to best balance his music schedule with academics, he embraces the extra time commitment.

“I live very close [to the high school], so I just stay in the music building until I finish everything,” Tirthapura said.

There is no formula that produces the perfect balance between music and academics. But whether it’s playing an instrument recreationally or playing pre-professionally, engaging with music instills discipline in students and trains positive study habits that inevitably improve academic performance.

When the effects of music are discussed, academics tend to become the major focus. But perhaps the most valuable reward from learning music is the lifelong passion and expressive outlet it provides adolescents with.

“I choose to put in this much work because I love playing music,” Tirthapura said. “To me, it’s not ‘work,’ and it never will be.”