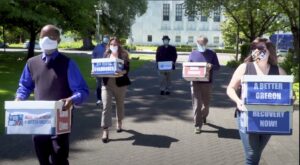 Oregon is the first state to decriminalize the possession of hard drugs.

2020 was a historic election year for the decriminalization of drugs. Every state with an initiative to decriminalize marijuana, including conservative-leaning Arizona and Montana, passed it.

In other states, some officials such as Virginia’s governor have expressed their interest in legalizing marijauna. Oregon took ending the War on Drugs a step further when it passed Measure 110. This measure decriminalizes the possession of hard drugs such as cocaine, methamphetamine, heroin, LSD and oxycodone. The law also provides funding for drug addiction treatment and prevention programs — in other words, treatment over punishment.

But on a national level, it is time for America to end the War on Drugs. Rather than crushing drug use like it was supposed to, this battle has only proven to be costly, ineffective and racist.

Because of its racial impacts, the ACLU called the War on Drugs The New Jim Crow. Every year, 1.5 million people are arrested in the United States on drug charges, with 80 percent of those charges being simple possession, according to the Drug Policy Alliance. African Americans make up 12.5 percent of drug users but account for 30 percent of drug-related arrests.

Black people are five times more likely to be incarcerated than white people, with half of the incarcerated black population incarcerated due to drug charges. This has resulted in the U.S. housing 25 percent of the world’s prisoners and becoming the number one in the world for the number of people incarcerated, one fifth of them for drug crimes.

Criminalization of drugs leads to a vicious cycle. When a drug addict is arrested and sent to prison, they do not receive treatment for their addiction. Prison does not help the addict face why they are addicted to drugs and resolve their problems, which means once they are released, they are likely to go back to using drugs again. This leads to two results: overdose or recidivism.

A study done on Rhode Island’s drug therapy in prison found that those who are arrested on drug charges and quit cold turkey have a higher chance of overdose when they are released and relapse. Ninety percent of the time suddenly cutting off someone’s drug use fails to solve the problem. The Center for American Progress found that in the first two weeks of release from prison, drug users are 13 times more likely to overdose than the average person due to their tolerance being lower.
Decriminalizing drugs would help alleviate the social and economic strain that comes with America having the highest prison population in the world. Rather than treating drug users like criminals, they can actually get the help that they need in drug treatment facilities where they are treated like patients.

Decriminalization of drugs also improves public health. After a decade of drug reform, the Global Drug Policy Program found that in Portugal, substance abuse and addiction rates had halved since decriminalization and treatment is a cheaper and more effective alternative to jail time. Overdose and HIV rates have also gone down because of better access to treatment options and clean needles. Meanwhile, the War on Drugs, which mainly uses long prison sentences to deter drug use, has done little to curb substance abuse rates.

As a whole, Americans are growing more supportive of a justice system that does not punish drug use. The libertarian-leaning CATO institute found in 2019 that 55 percent of Americans supported drug decriminalization. Sixty-nine percent of Democrats are in favor, while only 40 percent of Republicans are in favor.

Many opponents of decriminalization argue there is not enough funding for widespread drug abuse treatment. However, a study in the journal Crime & Delinquency found the cost saved from reduced incarceration and the reduced crime rates that would result from successfully treated patients adds up to billions. If just 10 percent of eligible offenders were treated in a rehab facility, the savings would be $4.8 billion. This money could be reinvested into prevention programs, expanding and improving rehab programs, mental health initiatives or education.

Years from now, more enlightened citizens will no doubt look back at The War on Drugs and wonder what we as a society were thinking. It’s time we reevaluate our attitude toward preventing drug use and take a rehabilitative approach to the problem.