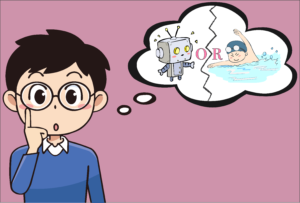 After six years of swimming and breaking my personal record last season, I was anticipating more improvement this season.

However, my dreams of success quickly transformed into a lethargic year stuck at home, pretty much destroying my fitness. But of course, I had a Plan B:  Because of the shortened swim season and practice times, I could easily gain P.E. credits while slowly getting back into the groove of swimming, thereby avoiding remote P.E. classes. Joining the swim team would give me the opportunity to get some fresh air and regain my fitness while earning credits.

The season was initially on track to start on March 8; then, during the last week of January, it was announced that swim season was going to start on Feb. 1.

I wasn’t anywhere near ready.

Filled with anxiety, I scrambled to arrange a physical so I could be approved to swim in less than a week. This process took forever, but I finally scheduled a physical on the day before tryouts.

Then, at the swim informational meeting, the coaches announced that students could only participate in one cohort at a time. Since I already joined the robotics program at the start of the year, I had to choose between robotics and swim. The choice was difficult: joining a sport that I had practiced for many years or sticking with a commitment I made back in the fall.

In the end, I chose to stick with robotics. After all, I had already committed numerous hours to it and competition season was just around the corner.

Although I thought this would be the end of my pitiful experience, there was more disappointment to come.

On March 5, the school announced that the one-cohort rule would be lifted, and students would be able to participate in two cohorts: one high school sport and one extracurricular activity.

When I heard this news, I wanted to laugh and cry at the same time; I had missed the swim season (and my much-needed P.E credits) for no reason.

If the season had started in March, I would have been able to participate in both.

Even though this situation was unfortunate and chaotic, in hindsight, it was a funny incident with extremely poor timing.

Though I  missed out on the chance to exercise and slowly get back into the routine of swimming, I look forward to joining the De Anza Cupertino Aquatics (DACA) swim club in the summer in preparation for the swim season next spring (hopefully). And maybe one day, I’ll finally get my P.E credits.