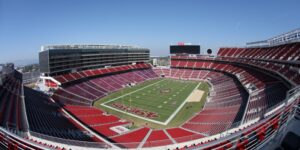 Levi's Stadium seats nearly 70,000 people and was the sight of Super Bowl L between the Broncos and Panthers.

The school’s annual Homecoming football game will be held at Levi’s Stadium on Sept. 21 against Santa Clara, the result of an outreach effort by the San Francisco 49ers to local communities.

The admission ticket will cost $25 while the cost of a bus ticket will be $10, Homecoming commissioner senior Madison Hartmann said. Students are free to drive to the game, but they will have to pay a $20 parking fee.

Late last semester, coach Tim Lugo was approached by Jared Muela, the director of 49ers PREP, a program under the 49ers Foundation to foster better relations with nearby communities. Muela offered Lugo a chance for the football team to play against Santa Clara High on Sept. 21 at Levi’s Stadium for the 49ers’ annual high school football double-header.

At first, Lugo was hesitant because Homecoming had already been set to be played against Monta Vista in October on the school’s Benny Pierce Field.

“Initially, I couldn’t say yes to Muela’s offer, because the school had already decided on [the October date] for Homecoming,” Lugo said. “I couldn’t just move Homecoming.”

Lugo pitched the idea to the administration, who unanimously agreed to host the game at Levi’s Stadium. Since then, the administration and the 49ers PREP have been meeting to figure out the logistics of the event.

According to Hartmann, the current plan is that on game day, the school will provide spirit buses to pick up students at 3:30 p.m. on campus. The buses will arrive at Levi’s Stadium at 4:30 p.m. and students are expected to finish security checks and be seated soon afterwards.

Before kickoff at 5 p.m., the choir will perform the national anthem on the field. English teacher Erick Rector will announce the game in the same way he does all home games. Once the 15-minute halftime starts, band, color guard, dance and cheer will perform their shows and the Homecoming court will come on and off the field. After the game ends, Los Gatos will play Cupertino at 7:30 p.m.

With the change of location, however, there will be changes to some Homecoming traditions. For example, the Homecoming court will walk on the field instead of riding around in vintage cars. Additionally, the event will follow stadium policies, meaning outside food and big bags will not be allowed; additionally, half of the stadium will be closed off to the public.

Regardless, many students are excited for the experience of the Homecoming game at Levi’s Stadium.

“I think it’s a really cool opportunity for the football players, dance team and others involved,” sophomore Cynthia Zhang said.

Because the game is in partnership with 49ers PREP, the program will take the majority of the money; however, 49ers PREP will be giving this money to charity. The school will receive $5 each from the first 1,000 tickets bought with the SARATOGA promo code, making up for some of the loss of home gate and concessions revenues. Due to the extra work that goes into having the game at Levi’s, it probably won’t happen again but might not be impossible, assistant principal Brian Thompson said.

Regardless, the 49ers PREP program has made its commitment to the Bay Area community by providing SHS an opportunity to play in Levi’s Friday night football series.

“The program realizes that being a good community member is important and by giving us this opportunity, they’re trying to build community roots with our school,” Lugo said.