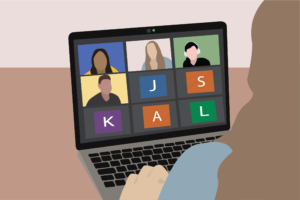 Enter any teacher’s online Zoom class this year, and you’ll see some students looking up and moving the way they would in a physical classroom — they have their cameras on.

Other students appear as symbols, initials or black boxes — they have their cameras off, often to the chagrin of their teachers.

From slowing Wi-Fi connection to creating concerns for privacy, use of the Zoom camera function has been controversial in virtual classrooms. There is no schoolwide policy regarding camera use, and teachers have done everything from making it a strict requirement to a mere preference.

For social studies teacher Kirk Abe, making sure students keep their cameras on during the class period is a key to replicating an in-person experience.

In his classes, having cameras on is mandatory, and he asks students to message him at the beginning of each class if they have technical issues that prevent them from turning their cameras on. He finds that being able to see his students helps guide his teaching.

“Little things like nods or facial expressions are so helpful in the situation we are in now,” Abe said. “The visual aspect of actually seeing your students helps in so many ways such as determining if students are connecting with the lesson.”

On the other hand, while math teacher Jennifer Mantle would prefer students to have their cameras on, she doesn’t require them to do so, recognizing that students may have anxiety about how they look or may not want to show their living environment.

Mantle also uses students’ facial expressions to gauge how well they understand concepts and problems, but she said this is much more difficult when “they are just a name or whatever they have chosen for their Zoom icon.”

Mantle also feels that students keeping their cameras on helps create a sense of community and familiarity within the class.

But for students like junior Paula Nguyen, persistent technical difficulties make it hard to comply with her teachers’ camera policies.

Nguyen’s laptop camera has been broken since early September and only functions for intervals of less than a minute each. Because of this, Nguyen attends all of her classes without her camera on and said she has subsequently lost points in her participation grade.

Although Nguyen has access to an iPad and phone that both support Zoom and have working cameras, she points out that using these devices for classes is often impractical.

“For classes like AP Art History and APUSH where we have to see small details or read text from the screen, the iPad or phone screen is too small,” Nguyen said.

“I wanted a way to show my appreciation to those students,” Thomson said. “It really made teaching all the more fun and effective.”

At the end of first semester, Thomson asked her students to fill out a reflection survey and found that the majority wanted her to mandate all students to keep their camera on for the whole class period.

Thomson said she encourages students with stable network connections to turn on their cameras to create a better learning environment socially and emotionally. Although Thomson does not press her students to keep their cameras on during regular class days, everyone is required to have their cameras on and angled at their faces or hands for test days.

“I miss seeing students every day, and [students having their cameras on] makes teaching more bearable,” Thomson said.

Thomson added that for students planning to ask for a letter of recommendation, it is even more important they make an effort to keep their cameras on during class.

“If I can’t picture your face when I see our name, I don’t see how I can write a good letter of recommendation for you,” Thomson said.

Last semester, a significant number of students in Thomson’s classes opted to have their cameras on, which she said she valued.

“I would be able to recognize most students by their faces, which is saying a lot during remote learning,” Thomson said. “Since we are all in our own houses, creating as much of a ‘normal’ classroom environment is huge. It is much easier and nicer to see faces versus blank screens for a class.”