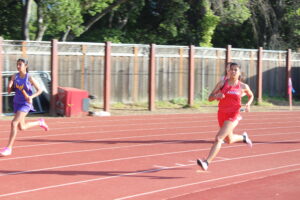 Permalink
Over the past two weeks, individuals on the track team competed in SCVAL and CCS.

The track team ended their impressive season on May 15 with some individuals making a CCS appearance at Gilroy High School.

Despite the lingering effects of the COVID-19 pandemic on some athletes — such as ones being out of shape and lacking experience in their event — as well as the loss of strong seniors to graduation, the team thrived as many individuals set new personal records.

Dance, who primarily runs in the mile, 2-mile and 800-meter events, attributed his success to coaches and teammates who motivated him to perform at his best. Their support, he said, helped him achieve a 4:12:12 mile time to break the school’s record, previously held by Steven Sum’s 2015 4:14.61 time.

Additionally, Dance qualified for CCS finals in the mile and two-mile event with a time of 4:14.87 and 9:36.92, placing 2nd and 8th respectively.

“Every day, they motivated me to go to workouts and were really helpful,” he said.

Dance, who committed to UCLA’s Division I Track and Cross Country program on a full scholarship, looks forward to continuing his high school success as a college athlete.

“I’m going to have fun running with guys who are at the same speed as me,” he said. “In fact, we’re spending a month at Big Bear over the summer where we’re just running and bonding with the team.”

Dance stressed how grateful he is for his four years on the track team.

“Just training with a team like this everyday has been a fun process,” he said. “I’m finally taking it all in because it’s my last year.”

Krishnamurthy participated in the 4×1 relay and the long jump at CCS with a result of 50:11 seconds and 17 feet and 3 inches respectively. She said her performance at SCVAL and CCS exceeded what she expected, noting her improvement in those events since her freshman year.

“Right now, based on all the times where I have kept going, I am in a good spot and I’m happy with all my results,” Krishnamurthy said.

Additionally, she said one of her favorite aspects of the season was helping the new members get familiar with the team. Over the season, she looked forward to creating new bonds with people.

Tippets, who also competed both at SCVAL and CCS in the 4kg shot put and 1kg discus events with a distance of 31 and 92 feet respectively, looked forward to improving her personal records and was excited to finally compete after a COVID-19 year with no full season.

“I was extremely satisfied with my SCVAL performance because I made two very big personal records in both events,” Tippets said. “Although I was a little disappointed with my CCS performance, I was happy I was able to keep up my consistency.”

Like Krishnamurthy, Tippets said one of her favorite parts of the season was interacting with her teammates and friends.

“I got to meet a lot of my friends from other schools by going to invitationals during the season,” Tippets said. “Just seeing them and making new friends was really fun.”

Motivated by her peers, Tippets hopes to continue to improve her performance. Her goal is to break a track and field record and have it displayed in the records board on the lower field, she said.