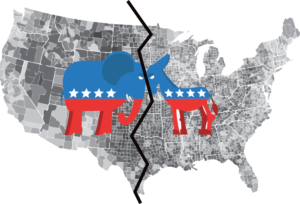 As polarization and partisanship collide, American leadership and its future become stunted

More than 200 years after George Washington warned against the rise of political parties, the American political system has somehow fallen prey to the two-party system, becoming the nation Washington warned against. The spectrum of beliefs and open discourse between members of different parties have been cast aside, with representatives standing stubbornly for their respective party and fighting their opponents regardless of what benefits their constituents.

If America wants to protect some semblance of democracy, the two-party system needs to be dissolved. Polarization has created a game out of government procedures, overriding infrastructure meant to encourage innovation and plurality of opinion while implementing policy. It has also torn the country into two, with extremes on either side that seem to be far from finding a middle ground.

However, a party system without extremism is possible, and has worked in the past. This transition has occurred largely since the 1990s, according to the Atlantic, when the two-party system began being reinforced by a combination of geographic splits tied with ideals. Republicans typically occupied more rural, suburban areas, embracing traditional Christian and conservative values, while Democrats tended toward urban areas, focusing more on diversity and civil rights.

This cultural split soon expanded as increasing nationalism caused political parties’ values to become a zero-sum game. While state and local elections used to play a larger role in policy changes, the narrative has been refocused toward federal elections, with a few core party leaders becoming the focal point for those running at all levels. The media has also given most coverage to national elections, while local newspapers struggle for financial survival and no longer covers cities and counties the way they did a generation ago.

Presidential elections, previously differentiated from Congressional elections, merged into one fight for a dominating party to hold consistent power. The national government goes through cycles every few years, alternating between a Democratic to a Republican stronghold, raising the stakes of elections.

If we truly want to encourage innovation in the government sector and prevent utter polarization, elections have to be run similar to how we monitor our markets. The two-party system has to be dissolved through cultural shifts, allowing independent leaders to win based on their policies alone. This would encourage competition as it would in the economic marketplace.

Since political parties are a form of free speech, making the shift away from them comes from within the parties and from the media. Leaders within each wing of the spectrum have to make the push in the direction of moderation, ceasing to vilify the members of the other party. Voters within each party must make the joint effort to understand other perspectives and listen to the stories of the opposing side to understand their affiliations.

In addition, voting ballots should actively fight against making a person declare their party affiliation at all, allowing them to vote openly for any person who chooses to enter the race. This does not mean candidates themself cannot declare themself as Democratic, Republican or other, but that voters should not receive different initial packages based on their declared affiliation.

Dissolving the two-party system, however, would not mean avoiding political parties at all, since this is a natural phenomenon of democratic systems. Rather, it opens up the field for a proportional multi-party system (as they have in New Zealand, Sweden and many other countries) as a viable option. The idea of a proportional multi-party system is exactly as it sounds — party seats are allocated based on the percentage of the population that votes for them.

Without the added restrictions of falling within the guidelines of a singular party and the pressure from other front-runners, politicians will be allowed to innovate further and bring ideas out of the norm. Former presidential candidates like Bernie Sanders, Andrew Yang and Michael Bloomberg would not be forced under the same wing despite standing on very different locations of the Democratic spectrum.

The multi-party system would provide an opportunity for the U.S. to return back from the extremism it has fallen to today. At the very least, this could create a  party system with an overlapping center like what existed in the 1960s and 1970s, with moderate Republicans and moderate Democrats.

Solving the issues of polarization and returning to the Democratic values on which the U.S was founded is a monumental task. It’s likely that there will never be a perfect solution, but continuing along the current path could lead to chaos and authoritarianism. The first step forward is equalizing the playing field for political candidates, opening up the doors for true representation.