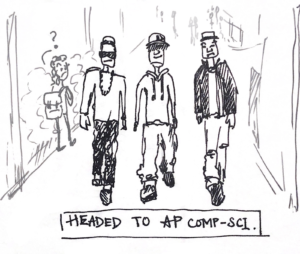 Disclaimer: This is attributed to our personal preferences, reader discretion advised.

We live in one of the most expensive areas in the country, yet many boys who attend the school act like they’re starring in “Shameless” Season 4.

From constantly throwing up gang signs and sagging your pants down, revealing your Ellen DeGeneres or Fruit of the Loom boxers, you look pathetic. So we are here to tell you to pull those pants back up and get to your AP Computer Science class. Although we won’t ask you to fully change your style, there are a few things that simply have to be said.

The other day, we were having a conversation with a fellow student when out of nowhere they began to say things like, “ya hurd,” “cuh” and “jit.” Our conversation ended with them saying, “Don’t forget to hmu to link later at the basketball game.”

The two of us exchanged baffled glances. What do these words even mean?

That same night, at the game, we saw someone step out of their mom’s Tesla with pants that didn’t fully cover their boxers. Now, there’s a distinct difference between baggy pants and ripped black skinny jeans that don’t even fit over your rear end, and this person definitely fell into the latter category. They topped the outfit off with a silver chunky chain — and a greenish blue ring around their neck to match.

We wanted to leave at that very moment. Nothing can justify wearing something so atrocious — that outfit should have been left in 2015.

Even outside of school, we can’t escape the pseudo-hood boys. While scrolling through Instagram, we’ll see students holding up fours with their fingers while posing for group pictures. This isn’t limited to just a few people — it seems like almost every boy at SHS does this.

What happened to peace signs and the good old thumbs up?

And posing isn’t the only issue with their Instagram posts — it’s the captions as well. You know, the heart-wrenching lyrics to their favorite Lil Uzi Vert song. Admittedly, our posts don’t have the best captions either, but there’s a distinct line between quirky and cringe.

Another issue that has become common among boys is that they have the weird urge to lie about having a perm. Now, that’s not something to be ashamed of — lots of people have perms. Why lie? Everyone can see right through it, and pictures from old yearbooks are proof that your hair used to be pin straight.

So, boys, we urge you to do us all a big favor and fix these small things to save yourself from further embarrassment.