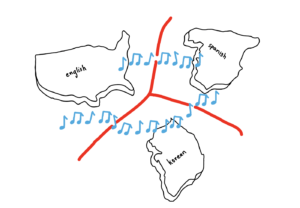 Photo by Anamika Anand
Languages other than English make songs much more interesting and versatile.

Permalink
Every American pop song on the radio follows the same template, so I decided to find something new.

Back in the day, my parents’ car radio stations were my primary source of songs — the simple song structures and generic melodies were enough to satisfy me. But over the years, I began to drift away from the repetitiveness behind American pop and discover new genres, specifically by crossing the language border.

Modern American pop music’s repetitiveness stems from the use of same chord progressions and overall vibe. The majority of American pop songs are about breakups, sex or romance. A study found that the word “love” was most used in all American pop songs from 1958 to 2015 and that artists are using sexual references more and more as time passes.

Thankfully, when quarantine started, I was given the chance to explore new genres of music, given that there wasn’t really a car radio station for me to listen to. It was then when BTS released their hit single “Dynamite,” which became overwhelmingly popular in America and unlocked the gateway to the world of K-pop for me.

I realized how many K-pop songs are composed of a mix of singing and rapping — the production is more complex than American pop because it blends multiple genres. Although not understanding the lyrics may drive away some listeners, I actually prefer it that way, because the songs finally have something different from the generic lyrics I had been listening to. To top it off, I could do my homework without the distractions of trying to grasp the lyrics.

When I did look at the English translations of BTS songs, I realized that a lot of their songs are not actually about stereotypical topics like romantic love but rather more compelling and underrated topics. “Epiphany” is about self-love and “Dope” is about diligence and talent, both songs that defy the overused theme of romance.

Another selection of music I listen to nowadays are Spanish songs, which is a practical appliance of my knowledge of the language. I remember in my Spanish class last year, we did the Locotubre Latin pop song bracket, during which I was introduced to “A Contracorriente” by Alvaro Soler and David Bisbal. Its catchy beat and vibe that seemed to tell a story of adventure were addicting, and I have been listening to Alvaro Soler from then on. It has been refreshing to listen to a new voice and vibe.

While many of his songs start slow, they quickly change up by the chorus, incorporating variation in terms of rhythm and production. The overall positivity that radiates from his music is really infectious and a dominant characteristic of Latin pop.

I’ve found that breaking language boundaries has brought me versatile new music and helped me absorb new languages. I hope to continue discovering new alleyways of music — both to develop my language skills and to simply escape the vast wasteland of typical American pop songs.