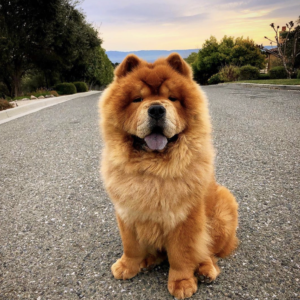 After amassing more than 500k followers, my dog uses his clout to take advantage of me.

Oscar was a small 2-year-old puppy when we first picked him up from Petaluma almost two years ago.

He had just retired from his modeling and dog show career, and it was time for him to find a new home. Turns out, he found my home.

He entered our house as a stereotypical Chow-Chow: food-driven, protective, very fluffy and flaunting a massive ego from winning dog shows.

Just a couple weeks ago, I was working on college apps late at night while watching TV, when Oscar approached me with a sympathetic face, a common sign that he needed to use the restroom.

Just as I opened the door, Oscar darted through our front yard and snuck under the fence into our neighbor’s property.  It was pitch black outside, and I began to panic — I had just lost our dog. In my loose pajamas, I leaped over the fence, trying to listen for signs of movement.

Through the midnight silence, I heard small paws scuffling through piles of leaves and scurrying through the dirt. I finally managed to locate him, sneaking up from behind him to hook his leash. Fortunately, his energetic start out of our house changed into a weary walk back to our home.

Through these similar experiences, and his aloof but sweet personality, my 14-year-old sister and I decided to flaunt our Chow-Chow’s looks and personality via his own TikTok account, @oscarfloofybear.

From Oscar’s adorable interactions with other dogs to him attempting to stuff whipped cream into his mouth, Oscar’s videos quickly gained traction on the popular social media platform. He garnered over 550k followers and 4.3 million likes in the span of 8 months. Fans obsessed over his so-called “floof” and stubborn personality.

From traveling with Oscar on vacation to beach spots or popular hiking trails, Oscar’s day-in the life is captured through the lens for his die-hard fans. After a video is posted, viewers would always frantically comment “first” or “Will Oscar respond to me today?” hoping for a response that my sister would often  give them.

However, even celebrities can get tired of being filmed. The majority of the time, we have to lure Oscar with his favorite beef treat to walk in certain directions or look certain ways. But the adorable faces that he makes, his glistening eyes staring at the food and his wide open mouth drooling vigorously just makes the audience more addicted.

With social media popularity comes endorsements from small dog clothing and art companies. Throughout his time on TikTok, Oscar has been sent different costumes, toys, and artwork, some of the best including “hypebeast” clothing but for pets and a canvas of an admiral but with Oscar’s portrait.

Managing Oscar’s TikTok account with my sister has been an exciting adventure. Even though Oscar never listens to me, has way more clout than me and receives more attention than I do, his unique personality makes me love him even more.