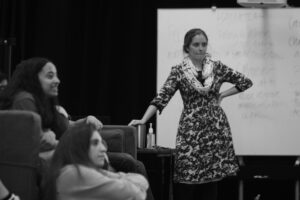 English 10 and drama teacher Sarah Thermond will be a full-time drama director at Palo Alto High School next school year.

Due to its large school size of almost 2,100 students, Palo Alto is one of the few high schools in Northern California that offers a full-time theater job. When Kathleen Woods, a former SHS drama teacher who made the same transition to Palo Alto, retired from her position, Thermond knew she wanted to apply for the post. She said teaching both English and drama at the same time at SHS has been difficult.

“I have really enjoyed teaching in both of the departments I have worked in at SHS,” Thermond said. “But I'll admit that trying to teach so many different courses — four different drama classes, English and all of the after-school plays and musicals as preps — has been a pretty big challenge.”

Due to decreasing enrollment numbers in drama, Thermond knew it was likely she would have to teach even more English courses in future years, which was a large factor in her decision to switch schools. Next year there will be only one drama class, and the fate of the productions is uncertain because of COVID-19.

Thermond is a class of 2007 Saratoga alum. While attending high school, she was a dedicated drama student and religiously participated in fall plays and spring musicals. Thermond graduated from the University of Southern California School of Dramatic Arts in 2011, and her first job out of USC was as an English and drama teacher at Saratoga. Throughout her teaching career, Thermond has also taken up acting and directing gigs for productions around the Bay Area such as the musical “Annie,” “Educating Rita” and an all-female cast of “Hamlet.”

Even though she thinks she will have an easier time being a full-time theater director at Palo Alto, Thermond said she will miss Saratoga High’s culture of students placing trust in their teachers, who empower them to take initiative and achieve great things. She appreciates her former teachers for accepting and respecting her as a colleague right when she started teaching; she has tried to take on the same welcoming attitude toward her students.

“I've tried to give students a platform to run events that they want to try and to hold really important leadership positions with their peers,” she said. “I feel like this is a community that is committed to doing good work and that tries to empower people to go after what they want to do.”

Thermond encourages her students to take initiative in clubs such as the Drama Club and Comedy Sportz Club on campus. As the adviser of these two clubs, Thermond said she wants students to have fun and work hard on bettering their artistic skills.

Junior Francesca Fernandes, who is not currently in the drama class at SHS but has participated in the school’s plays since her freshman year, said that Thermond is not only dedicated to her work but also very kind towards her students.

“She really puts her all into every single show she’s directed and uses every cast member thoughtfully,” Fernandes said. “Even if you’re not a lead, she still finds ways to really feature you and your strengths so that the show is as great as possible and you’re a valuable member of the show, no matter what your role is.”

Fernandes has several fond memories of the plays, but one of her favorites is from “Mary Poppins,” the spring musical in 2018.

“We had a number called ‘Playing the Game’ that involved scary toys freaking out the kids Jane and Michael, and Ms. Thermond really turned that number into something amazing,” she said. “Each cast member was hidden in a part of the set, and it was really fun and cool for all of us. I think the audience also had a great time watching it.”

Senior Natalie Tjahjadi’s favorite memories from drama are also from the shows, particularly “Mary Poppins” and “The Sound of Music.” She has been in Thermond’s drama class all four years of high school, and she has also participated in all of the main stage plays and musicals that Thermond has directed.

In fact, Tjahjadi said that Thermond was the one who initially inspired her to try acting and that she has loved working with Thermond for the past four years.

“She was the director for my first musical in fourth grade, and that show basically sparked my interest in theater,” Tjahjadi said. “Theater has been a really big part of my high school experience. Ms. Thermond makes a really strong impact on every student she works with since she’s easy to talk to and makes a genuine effort to get to know all of us.”

Tjahjadi said Thermond’s class in particular was one of the highlights of her high school experience.

“Her class was really fun and chill and was a great way to escape the pressures and stress of high school,” she said. “Ms. Thermond created an environment for everyone that was super welcoming and friendly, which helped form a really strong bond between theater kids in all different grade levels.”

Thermond said she will miss the school and its people, and will find it difficult to root against Saratoga High during football games and other competitions. She wants to thank the students and staff at Saratoga for “bringing open-mindedness, enthusiasm and expertise into each class, event and activity.”

In particular, Thermond hopes for the best for the students she has met through the drama program.

“To my soon-to-be-former students: I won't be able to wave at you in the hallway, but I still am in your corner and wishing you only the best!” Thermond said.