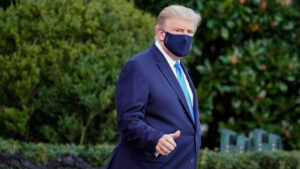 While many took to social media to express their positive feelings about the president catching coronavirus, it serves as an indicator of how serious the pandemic is.

Just before Oct. 1 at midnight, Trump tweeted that he and the first lady tested positive for COVID-19. Immediately afterward, when I opened social media, my Twitter and Instagram feed was scattered with stories celebrating the announcement, some of them writing that Trump’s diagnosis was “poetic justice” and others just laughing.

Some even went so far as to wish death upon the president — an extremely inappropriate response. Nobody deserves to die from the coronavirus.

While his diagnosis is ironic considering his message on the pandemic — that it is nothing to worry about — Trump’s diagnosis is nothing to celebrate. Although Trump was not being safe, he is supposed to be a role model for how to act, especially in dire situations like this.

If Trump had died from this disease, this situation would be nothing to celebrate about. It would be a tragedy that holds dire consequences that we would face as a nation.

Trump’s death would mean that none of the experimental treatments worked on him, which would be a significant setback. According to FiveThirtyEight, Trump received Regeneron Pharmaceuticals' cocktail of monoclonal antibodies, a treatment that has not been FDA approved yet. He also received Remdesivir, an antiviral drug that has been found to reduce the duration of the infection and increase survival chances, and Dexamethasone, a drug with a long list of side effects meant to reduce inflammation.

As the president, Trump had access to Walter Reed hospital, which is a military hospital. He had access to some of the best doctors, facilities and treatments in the world. Trump dying would mean that despite his exclusive access to experimental treatments, he was still unable to survive — a grave indication of the severity of the virus.

Fortunately, the treatment seems to be working. Trump has been declared transmission-free by his doctor though it’s unclear if he has tested negative yet.

Trump’s death would also pose another problem: the election. Trump dying would create a complicated situation when it comes to replacing a candidate this close to Election Day.

According to the Denver Post, 63 million ballots have already been sent to voters. Congress would either have to delay the election or restart the voting process.

The president dying would not leave us with a better president either. According to the 25th Amendment, if the president dies, then the vice president, in this case Mike Pence, will be sworn into office. Regardless of the duration of his term, which could either last a few short months or another four to eight years, it would still leave us with potentially disastrous results.

According to the Human Rights Campaign, in the past, Pence has blocked hate crime legislation that tried to make it illegal to harm someone who is part of the LGBT community. He also signed the Religious Freedom Restoration Act in Indiana, which, according to Indy Star, stated that the government could not infringe upon a person’s ability to practice their own religion unless it had a reason for doing so.

Rather than celebrating Trump’s COVID-19 diagnosis, we should let it serve as a reminder to stay safe and socially distanced because anybody can catch it, even those who are typically immune from the world’s problems.