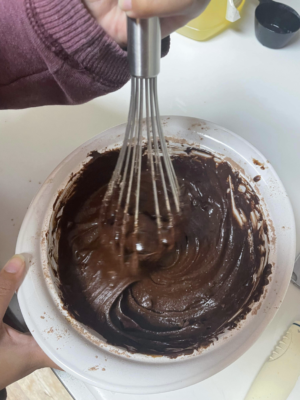 Photo by Tara Natarajan
The process of mixing the brownie batter.

Permalink
The cocoa powder all over my jeans was worth it.

When we decided to bake brownies from scratch for experimental purposes, we never thought we would encounter a series of obstacles from the dysfunctional Apple Maps to expired ingredients. After all, brownies are one of the easiest baked goods to make and it’s always better to have two sets of hands when you’re baking. Despite the challenges we faced along the way, the power of our friendship and Dairy Milk chocolate persevered.

Tara: Because we met on a Friday, I planned to drive to Safeway during my free fifth period to pick up ingredients for grand iced sugar cookies. Then I’d go home, clean the kitchen and wait for Kavya to come over. However, my plan hit a roadblock when I had a bad reaction to some new medication and was out sick on Thursday and Friday. Barely able to stand up without feeling dizzy, there was no way I would be able to drive to Safeway. So, we decided to return to an easy classic: chocolate brownies, having already had most of the necessary ingredients at home.

Kavya: As I rushed to Tara’s house, I was already an hour late. Apple Maps had failed me, and I was turning in circles around the vicinity of her house, moving to the wrong lanes and passing by her house two times before pulling over to the side of the road and FaceTiming her. Over the phone, she explained to me the directions to her house, where I trudged up a long hill of houses until I finally saw her waving to me at her door.

Tara: I was able to gather together most of the ingredients we needed: all purpose flour, cocoa powder, salt, canola oil, eggs and two different types of sugar. After a frantic search for chocolate chips (the half-empty jar of Guittard chocolate chips would not suffice for these brownies), I found an unopened bag at the back of my pantry.

Kavya: As I was putting together the dry ingredients in the bowl, I noticed that the chocolate chips looked suspiciously white. I asked Tara if they had expired, and she told me that her mom bought them recently. Just to make sure, I flipped the pack of chocolate chips to the back, and I gasped when I saw the label marking the expiration date: April 22. I quickly showed the label to Tara, who started brainstorming ways we could use something that resembled chocolate chips. Brownies aren’t brownies without chocolate chips, so we had to create an alternative plan on the fly.

Tara: Thinking on my feet, I snuck into my parents’ bedroom, and opened up the dresser drawer where my dad keeps his “secret” stash of Dairy Milk chocolate. To my relief, I was able to take one bar without making a noticeable dent in his collection. We used about half the bar to make up for the dearth of chocolate chips, and Kavya chopped it up masterfully before adding it to the dry ingredients.

Tara: While one of us stirred, the other one carefully folded in the dry ingredients into the mixture to ensure the smoothest possible batter. We had to keep shuffling around because we’re both lefties, and couldn’t manage to find a comfortable configuration to stir and sprinkle. This sparked a deeply intellectual and relevant discussion about all the ways we’ve been oppressed as left-handed Indian girls. After a few minutes of lively leftie conversation and mixing batter, we had a beautiful chocolatey brownie mix ready to pour into the tray. I generously let Kavya lick the rest off the whisk, partly because I love her and partly because she helped herself before I even realized.

Kavya: After I had to leave early for Tamasha practice, Tara put the brownies in the oven and texted me an hour later: they had come out perfect. Overall, it was a very successful baking day, and risking salmonella was worth the taste of the delicious batter.