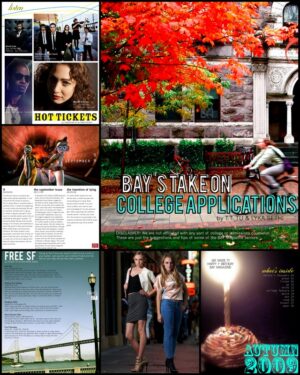 BAY Magazine, a local magazine started by Saratoga students and overseen by SHS alumnus and editor-in-chief, T.T. Tu, has completed a full year of publication and is on schedule to release its sixth issue this winter.

BAY Magazine, a local magazine started by Saratoga students and overseen by SHS alumnus and editor-in-chief, T.T. Tu, has completed a full year of publication and is on schedule to release its sixth issue this winter.

However, with most of the staff off at college, BAY magazine is currently interested in expanding its staff, not only to make up for students who have graduated but to diversify the staff with fresh, new writers from other schools.

Tu, currently a freshman at UC Berkeley, has decided to maintain his role as editor-in-chief despite being away from the majority of his staff.

“It may seem daunting, but I really want to make sure that the magazine still retains its quality and creativity,” said Tu. “Although I won’t be doing the nitty-gritty tasks, I still try to be as involved as I can.”

Tu has left various section editors in charge to run the magazine with faith that the high standard of the magazine will be upheld. Chosen head editors to manage the magazine are seniors Brian Kim, Annie Lee and Maggie Lin with seniors Tara Fatemi as design editor and Tiffany Mo as publicity editor.

“I chose our specific head editors because I saw their passion and drive for this publication. Of course, I know that they can do the job, but being this is their real first time on their own,” said Tu. “I am a bit nervous.”

The fall issue this year was dedicated to “going green.” The staff not only decided to address the issue through their articles, but to also make their statement clear by deciding to not print the issue.

“We dedicated an entire issue to going green and that was one of the most important issues that we thought we needed to address in the community,” said Tu. “This way, we still had an issue that promoted green initiatives, just in a different context.”

Apart from the print magazine, the staff has been working on improving their website, www.baymagazine.org, which includes the addition of a new blog, as well a full online version of the magazine. Publicity has also been key, in order to promote more community interaction and awareness throughout the Bay Area.

BAY magazine continues to evolve as a publication, and has high hopes for the future.

“Though I won’t play a major role, I will still lend my guidance and support from Berkeley,” said Tu. “BAY Magazine will continue to strive to become an outlet for teen expression.”

The fifth issue of BAY Magazine, Autumn 09, is currently available for free online viewing at www.baymagazine.org, and purchase at www.magcloud.com/browse/Issue/32049.