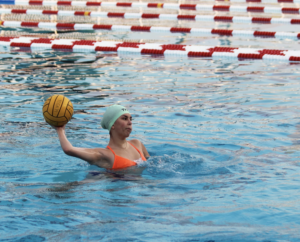 Senior Grace Green winds up to shoot during a preseason practice on Oct. 8.

With social distancing restrictions, a delayed season and a brand new coach, the girls’ water polo team began a one-of-a-kind season on Sept. 15.

The coronavirus has pushed the season, which usually begins in August, to Dec. 14, but the team has already begun to practice during their pre-season. While athletes must wear masks outside the pool, swim in different lanes and enter the locker rooms individually, the team is still able to host practices through individual swimming drills, shooting drills and strength conditioning. Still, they are unable to work on team drills and passing due to social distancing restrictions, said senior set player Grace Stuart.

“With new sports restrictions, we’ve had a couple rough patches, as social distancing in a full contact sport is difficult,” Stuart said.

Still, the leadership and dynamic of the team, along with the guidance of returning head coach Jerome Chung, has enabled them to have successful practices during the pandemic.

Previously, Chung coached the girls’ water polo team from 2016 to 2018 and the boys’ water polo team in 2019; this year, he is the head coach for both. According to Stuart, the team has reacted well to Chung’s coaching style.

In particular, the team has appreciated Chung’s emphasis on each individual’s technique and skill development. Chung is currently focusing on building a solid foundation for fundamentals such as leg drills and shooting.

“We’ve adjusted pretty quickly to our coach,” said senior wing player Dara Krainin. “He gives us lots of feedback and helps us to improve, and I think we’re all doing well.”

Aside from the shift in coaching, the team has an advantage because of their many experienced players.

“It’s rare to have five seniors on a team, four of which will have played for all four years,” Chung said. “Every senior has their own style of leadership and creates a fun team atmosphere.”

Although the team has many seniors to help guide it, fewer underclassmen have joined the team this year due to the atypical practices, so the team hopes to see an increase in athletes when registration opens on Oct. 19. Even with small numbers, however, the team maintains their teamwork and tenacity.

With the future of upcoming games and tournaments unclear, the team is currently practicing for their winter season. Although nothing is certain, the Falcons would play against teams such as Cupertino, Fremont and Monta Vista in the Santa Clara league.

Faced with these changes, the girls’ water polo team is working toward a unique but important season for the team. Considering the uncertain state of future games and tournaments, athletes have been focusing on building a better dynamic by working together and improving their individual skills to the best of their abilities.

“We want the team to enjoy the games they are able to play,” Chung said. “Despite the pandemic, we want to give the seniors the great final season that they deserve.”