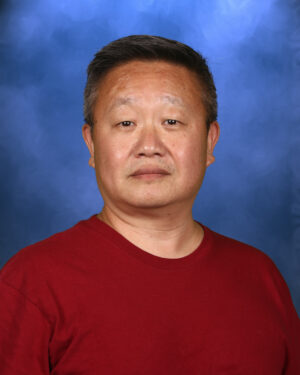 Q:Would you be willing to go back to school and teach in a hybrid format? Why or why not?

A: As lacking as online teaching is, I’ve got my setup here. I have a large screen where I have four displays, so I just switch back and forth looking at my students and the work. I use my Mac Mini instead of my laptop, and my internet speed is better at home than at school, but most people have it the other way around. That's why they go to school, but I've grown accustomed to doing it at home. For me, using just one laptop would be pretty rough because I’d have to use Notability and then switch back and forth between that and Jamboard. I have a better setup at home, so going to school would be a step down in terms of user interface. But I think the fact that we're going back is a good sign that we're hopefully getting back to normalcy.

Q: When would you feel comfortable going back to school?

A: It doesn't matter if we’re extremely careful in the Purple Tier if we’re forced to be exposed. Even if it's orange tier, it's actually just as dangerous, so arguing about orange versus purple is nonsense. We actually had teachers who lost a number of relatives to COVID, so I worry for them because chances are they are probably more vulnerable. For teenagers or younger kids, it seems to have less of an effect, but that doesn't make it any less scary.

Q: Do you think there is a benefit to going into hybrid this semester or is it better to just wait until next year?

A: For a vast majority of my honors kids, online is fine, but there are kids who have a hard time connecting and learning from this image on a screen. Watching my videos versus me explaining the same thing on Zoom feels different. But can you imagine what it feels like if I'm a live person, and I could actually read your face better? When your face is a small square on a screen, it's hard for me to read your face. And there's something about sitting there in the same space and communicating that brings your attention to a different level.

Q: Would you be willing to go back to school and teach in a hybrid format? Why or why not?

A: I've always felt, and I think most other teachers agree, that as long as we can get vaccinated, let's go back to school. For AP French last year, we would sit in class with 10 students and everybody spoke French every day. It was great. Then, from March 13 to the time we took the test, everybody lost all their French. It was really sad, so we definitely need to be back in school. All I can think of now is all the things that we could do if we were in class. I definitely want to go back.

Q: When would you feel comfortable going back to school?

A: They're already working on it right now. We're going to be in the rooms March 17 and March 17 to get our rooms ready. Then, assuming we don't go out of the Red Tier, I think they're going to start having kids come in on March 24 to practice all the protocols. In April, I think they're hoping to have some regular classes. To me, that sounds good, it's like “let's do it as soon as we can.”

Q: Do you think there is a benefit to going into hybrid this semester or is it better to just wait until next year?

A: For my French students, it's going to be much more practice with listening to and speaking French because the stuff that we do online is just not enough. I can put them in the breakout rooms, but not everybody talks very much if I'm not there. I call on people individually in classes, but it’s just one person out of 30 kids that can talk at a time. In class, we could be doing things like sondages where people are circulating and everybody's talking the whole time, or we can even go outside to do those to be a little more safely. Or we could do any of the activities where people are working one-on-one so that everybody's talking. It's just gonna be much more French input that they get now.

Q: Would you be willing to go back to school and teach in a hybrid format? Why or why not?

A: Yes, teachers are eligible for vaccines, and with other precautions being put in place, I think the risk of COVID is pretty low. Teaching in the hybrid model is a different story — I am not sure it will offer a lot of educational value compared to the current situation, especially if up to 50 percent of kids decide to stay fully remote.

Q: If you are willing to go back when would you feel comfortable doing so?

A: Waiting about three weeks after the first shot would make me feel comfortable that the protection against infection is pretty high. I would prefer if all students were able to return, but that is not realistic at this point. The hybrid model will present its own set of challenges, but that will probably be the only way to get some kids back on campus before we are very close to the end of the year. My guess is that even if we were allowed to have 100 percent of students back, a significant percentage would choose to stay remote, so in effect, we would be in hybrid in any case.

Q: Is there a benefit to staying online for the remainder of this year? If so, what and why is it important?

A: One benefit is that the teachers (and many students) are used to the remote model, so it would be easier for many teachers since we have prepared remote materials and lesson plans for the last part of the year. It will take everyone a little while to get used to the hybrid model and figuring out what we can and can't do and what will work best. The downside is that the kids who would benefit from in-person instruction and the interpersonal connections won’t get that.