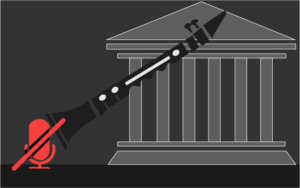 After media arts and AP Art History teacher Joel Tarbox asked his fourth-period AP Art History class about the meaning of a sculpture recently, he waited patiently for a response. Crickets. Unfortunately for Tarbox and most other teachers, this silence has become common.

Despite their best efforts to find a new normal, teachers, particularly those who teach visual and performing arts, have noticed significant drawbacks in teaching remotely.

Because of the communicative nature of media arts classes, Tarbox finds it harder to quickly address problems in an online setting.

“I find it easier to just walk over to their computer and show them rather than having to write long explanations or find a link that explains it,” Tarbox said. “I miss the interaction, the socializing and the ease we had to deal with things.”

Although tools such as PearDeck and Kahoot! can provide more opportunities for interaction, they do not let students talk with teachers or other students, an aspect Tarbox finds important.

To combat the distance between students and teachers online learning brings, Tarbox has resorted to a variety of methods, some less efficient than he would like.

“After I ask a question, I wait a very long time and hope someone will get uncomfortable enough to answer,” he said.

Tarbox also uses humor, gives prize incentives such as shirts and bookmarks and increases the use of breakout rooms to further engage students. In his media arts classes, Tarbox has also begun teaching other forms of media, such as podcasts, 2D design and animation in place of film, the main media form used in past years.

“A big difference now is that students need to socially distance and wear masks,” Tarbox said. “That makes it difficult for students to gather to film collaboratively.”

Replacements for filming with other students include emphasizing filming with family, utilizing royalty-free media, creating animations, filming with other applications like Zoom and abbreviating projects such as the senior capstone project, a project where seniors use video, audio, illustration, animation and 2D design to create anything they choose, from documentaries to video games.

The abbreviated version of the project starts at the end of first semester instead of at the beginning of the school year. The “American Story” project done by juniors in MAP, where students write and film a fictional film within a historical period, will need students to brainstorm how to replace the filming aspect while still creating an informational and engaging project.

Tarbox said he hopes these alternatives will persuade students to see virtual learning as a “creative opportunity instead of a creative cage.”

“If a student is struggling with a certain part of their music, I've had more opportunities than usual to actually meet with them on Zoom and hear them improve,” said Shiuan. “That helps me cope because I get to hear that they are getting better.”

Still, Shiuan finds the lack of communication with freshmen the most frustrating because he believes that a lot of growth takes place during the first three months of school.

“In person, students can process the information they hear and see and naturally make micro adjustments in the way they play to better match the other musicians,” Shiuan said. “The music-making process is so much more collaborative and organic — if one person messes up, it affects everybody else. If one person performs something positive, it can lift everybody else. But when we are stuck in our little Zoom-universes, that symbiotic relationship breaks down.”

Shiuan also said he misses the little moments that occur among students in between the music such as “a-ha” moments, jokes and when musicians overcome a difficult passage. Due to online connection lag, only one person is typically unmuted when the ensemble practices.

“It's difficult to replicate these situations because most people are on mute, and it doesn't feel as natural to have that camaraderie when you aren't in a room together,” Shiuan said. “It's also not ideal as it's more difficult to have as specific feedback as we would in person, but it's the best adaptation we can make.”

To create an environment as similar as possible to an in-person one, Shiuan paired one wind ensemble member with at least one freshman symphonic band member. In doing so, he hopes to create a community outside of school.

“That connection is valuable because normally it's natural for us to implement it, but now we’ve had to purposefully make it happen,” said Shiuan. “It's been really helpful.”

To encourage more social interaction among students, Shiuan will sometimes tell the section leaders to end rehearsal by checking in or playing a game with their section for ten minutes.

By following up with his student leaders on online learning, Shiuan has been able to further connect with his students, which he called a “silver lining” to the whole situation.

Although both Shiuan and his students miss the social interaction and connection in person learning offers, the adaptations help recreate the family aspect familiar to the  music program.

“What the students love about the music program is doing something musical with your friends,” Shiuan said. “My major goal is to allow students to continue to connect despite being separated.”

But even as teachers  find solutions to the challenges of online learning, they still find themselves missing the aspects of in-person learning they took for granted.

“I miss interacting with students everyday,” Tarbox said. “You don’t get into this line of work to be talking to a computer screen all day.”