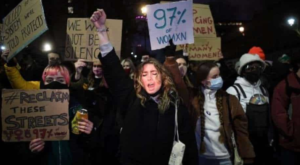 After the kidnapping and murder of Sarah Everard, a 33-year old woman from London, on March 3, women from all over the world started sharing their own experiences with assault and harassment. For many, this movement encouraged them to recount their own stories on social media. Many survivors got support. Others’ stories were invalidated. These were typical of the comments posted on social media:

This latest wave of the #MeToo Movement has resulted in more women speaking out and sharing their stories. Unfortunately, it has also been labeled a trend.

The fact that anyone is calling it “trendy” to be sharing such a personal traumatic experience is beyond disgusting. Calling it a trend invalidates the experiences of sexual assault survivors, stripping power from people who are speaking out and reducing individuals to a homogeneous group.

Rather than taking holier-than-thou potshots at survivors, those lucky enough to have escaped such traumas should practice being an ally. it is crucial for people to stand in support and combat the victim-blaming culture that remains ever-present in today’s society.

It is infuriating to see the silence from most men right now. I follow over 1,000 people on Instagram and I have seen less than 10 guys speak out in support of sexual assault survivors. I’ve had arguments with people who try to invalidate the importance of learning about sexual assault and consent by claiming that things such as “financial literacy” are much more useful. And worst of all, I attend a school district that has refused to acknowledge the toxic rape culture that exists both at both Saratoga High and in Los Gatos High, still largely ignoring the countless stories students have come forward with.

Our school is known for poor management of sexual assault:  The 2016 Netflix documentary “Audrie & Daisy” sheds light on the administration’s questionable actions before and in the aftermath of Audrie Pott’s 2012 suicide.

The Pott case set a bad precedent for future sexual assault cases in this district: Allowing the three boys who assaulted Pott to stay on campus sent a message to women and girls that they aren’t equals. Her offenders were still allowed to participate in sports and two of them even walked at graduation, basically telling sexual assault survivors that their offenders’ lives were worth more than their own.

In Los Gatos, when sophomore Mia Lazoya, the founder of the LGHS MeToo movement, first reported her sexual assault, her offender faced no substantial repercussions. Instead, all Los Gatos High school did was switch around Lazoya’s schedule so she wasn’t in any of his classes. And because the district wasn’t helping her, she had to take the initiative and leave Los Gatos High School. In the NBC: We Investigate report covering the district’s sexual assault allegations, Lazoya and LGHS alumna Lyssa Broomfield said the culture at Los Gatos wasn’t a safe environment for reporting assaults.

And this has been proven time and again. Even after hundreds of Los Gatos and Saratoga students shared their own experiences with sexual assault, superintendent Michael Grove once again diminished the seriousness of these allegations by referring to the problem that our district has as “not a pervasive” issue in an email to the community.

But taking sexual assaults seriously is not a trend or something to be diminished for public relations purposes. It is a heartfelt and real movement. For the people who are shocked that the numbers of females who are assaulted or harassed are so high or confused why people are suddenly speaking out, consider the stigma that comes with sexual assault.

With Brett Kavanaugh appointed to the Supreme Court despite Dr. Christine Blasey Ford’s allegations of being assaulted by him when they were in high school, it’s clear that many people would still rather take the side of a rapist over a victim. The culture that we’ve fostered forces women to stay silent or be treated like social pariahs if they come forward.

Right now more than ever, it’s important to support sexual assault survivors. Invalidating or minimizing their experiences does nothing but steer our society away from true solutions to these massive and pervasive problems.