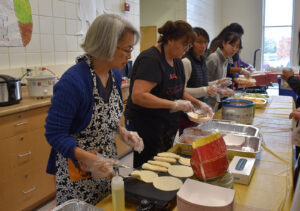 Teachers and students prepare tacos for the Tacos For Paradise Fundraiser on Nov. 28.

After school on Nov. 28, a line stretched from the cafeteria out into the quad as dozens of students waited to purchase tickets for tacos, chips and beverages from the Tacos for Paradise fundraiser.

United by a common cause, teachers, administrators, parents and students volunteered and raised $1,956. A retired Los Gatos High art teacher donated $44 to reach an even $2,000, all of which is going to the North Valley Community Foundation to help the Paradise community.

Organized by science teacher Kelly Nicholson and Los Gatos High ceramics teacher Leah Aguayo, who taught at Saratoga for 35 years prior to moving to Los Gatos, the fundraiser took place days after the Camp Fire was completely contained on Nov. 25, according to NPR. The deadliest wildfire in California history lasted for more than two weeks, leaving at least 85 people dead and almost 14,000 homes destroyed.

Aguayo’s idea of hosting a fundraiser came about three weeks before the event, when she learned about the fire’s devastation through Facebook and the news. She remembered feeling powerless and upset when she heard about the victims of the Butte County fire.

“I just could barely stand to think about those poor families and if that were to happen to our community here,” Aguayo said. “If the mountains caught on fire here and Saratoga was wiped out or Los Gatos was wiped out like that, what would we do? It could happen to anybody, and unfortunately it happened in Paradise, California.”

Because Paradise has a larger population of elderly people compared to most of California, the community will have a harder time recovering. Many residents are retired and likely on fixed incomes with Social Security as their main income source — an amount that is not sufficient to live on in the high-cost state,  Aguayo said.

“They probably spent all of their money moving out of this expensive area to find their paradise to retire in and to live about their lives in a good place, and the fires just happened so fast,” Aguayo said.

Aguayo decided to host a taco fundraiser because delicious tacos “could feed the masses.” Chicken and avocado tacos were available for $5 each, as well as water for $1 and chips and salsa for $1.

Aguayo says she teaches people how to cook more than she teaches ceramics. At Los Gatos, she taught her students how to make “the best guacamole in the world,” and Aguayo is also famous for her salsa: “Mrs. A’s Famous Salsa Buena.” Named by her students, the Salsa Buena originated 13 years ago with the help of her students here.

“Saratoga knows my salsa,” Aguayo said. “Saratoga knows Mrs. A. I am a part of this school, and it was very sad for me to leave, but I’m back. And I’m coming back to see all of you and to be here with my coworkers. There are so many teachers that are stepping up to help. We all feel so good doing this.”

Students at the fundraiser also noticed how the community came together to support the cause.

“It really shows that Saratoga High School cares,” junior Risa Carter said. “I know some of the teachers have connections with some victims of the California wildfires, so I think it’s great that teachers and students are stepping up and Mrs. A created this.”

“Let’s just bridge that gap and do events together,” Aguayo said. “Everybody here feels so good about helping. We should be together. We should not be competing over anything. Love the sport, don’t hate the team.”

The second Tacos for Paradise fundraiser will be at Los Gatos High on Dec. 13 from 3:45 to 6:30 p.m., located in the culinary building across from the pool. Saratoga is invited to Los Gatos to have more delicious tacos, Aguayo said.