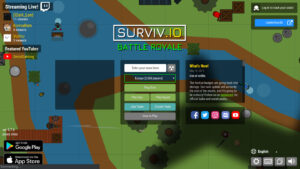 A Surviv.io “semi-pro” reflects on 2-year journey, including squads with friends, game analysis and a 6-month hiatus.

It all started in September 2018. When I first logged onto the Surviv.io website, the home page was almost laughable — players were represented by a circle as a body, two smaller circles for their hands and an additional circle for a backpack. The M870 — one of the game’s shotguns — looked more like a stick than a gun, and the ammo took the form of colored squares.

Although I was underwhelmed by the graphics, I tried jumping into a game. After being instantly killed, I wanted revenge. I played game after game and died spectacularly each time, but I was hooked. So began my Surviv.io addiction.

Unlike other battle royale games like Fortnite or PUBG, which can last about 20 to 30 minutes, Surviv.io games typically take only 5 or 6 minutes (or less if you die early, as I often do). As a result, the short, action-packed matches were perfect for tutorials and lunches.

As it turned out, many of my friends played the game as well, although none of us were particularly skilled. Instead of working on homework, we spent our lunches hopping into casual squad matches and yelling at each other for dying too fast. But even our daily lunch escapades were not enough, so we played a ton on our own as well. At least I did.

When I got my first 10-kill game in solos, I thought I had an accomplishment to brag about. I even screenshotted it. But when I checked the all-time leaderboard, I was in despair: the top player had 27 kills, sniping over a third of the players in a 75-player lobby.

The next year, I started playing smarter. I watched a few recordings of high-kill games, analyzing everything from the players’ choice of weapons to their movement and adjusting my playstyle accordingly. I learned to immediately leave games with late or far-off spawns, check the map frequently and only loot the items I needed most. In just a few weeks, I got my first 13-kill game. Not to flex or anything, but that’s a 30 percent improvement.

From that point on, practice made perfect. My aim and overall movement got better. I learned how to peek out and shoot from behind obstacles more effectively, making it much easier to pick off individual players. More recently, I figured out how to “overclock” — a technique that allows players to fire shots in unnaturally close succession by switching between their weapons at just the right time.

My attempts at high-kill games didn’t come without hiccups, though. In November 2019, I had 12 kills with 44 other players remaining. I was on track for a 25- or even 30-kill game, then died at the hands of a player who suspiciously landed all of his shots despite my best attempts to dodge. The mass distribution of IceHacks, software that allows cheating players to lock their aim onto enemies, ruined countless high-potential games for me. After getting slapped around by aimbots over and over again, I decided to quit, only coming back six months later.

Finally, in October, I achieved a 23-kill game with over 3,000 damage. A wave of relief washed over me. Although I never reached the all-time leaderboards, a goal I initially thought would be easy for an .IO game, I was satisfied. “Semi-pro,” as the pro community would call it, was good enough for me.