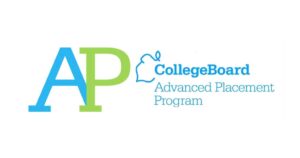 The College Board’s AP tests for the 2020-21 school year are a combination of both in-person and online examinations. While last year’s tests were shortened to 45 minutes, this year’s tests will last the full three hours, covering all the content in the standard curriculum.

As a result, both teachers and students have faced obstacles  while preparing for a full-length exam in the school’s hybrid-learning model with its decrease in instructional minutes.

For example, AP English Literature teacher Suzanne Herzman said Socratic seminars, which are good practice to improve critical thinking and analysis skills on the test, were difficult to conduct this year in a hybrid format.

“Remote students could hardly hear anything that the students in class were saying,” Herzmann said. “It was kind of a mess.”

On a more positive note, she has noticed that students have expressed desire for review sessions, something that has never happened in the past.

In more content-based and hands-on classes, including most science classes, teachers also face the challenge of adapting labs to fit online instruction.

Senior Enoch Luk, who is taking AP Earth Science (APES) this year, said that despite APES teacher Kristen Thomson’s attempts to implement at-home labs, the experience hasn’t been the same. Senior Henry Weng has seen the same challenge in his AP Chemistry class.

“The weightage of labs in the actual exam is low,” Weng said. “We just haven’t been able to go into as much depth without them.”

The lack of instructional minutes in this year’s district schedules has also forced a shift away from classical lecture-style teaching to more asynchronous work for students.

Herzman has had to cut some texts and assign work that used to be done in class to students to work on asynchronously. For example, she used to have students complete practice essays using past AP prompts the College Board provides during class, but the lack of time has rendered that option unavailable.

Despite the remote environment, Herzman believes that her students are highly prepared for the exam based on what she has observed of student performance during remote learning. Both teachers and students are looking forward to a return to normal  during future AP exam administrations.

“I am highly optimistic about next year,” Herzman said. “Students will get vaccinated and we will be able to do activities in-person, better preparing them for AP exams.”