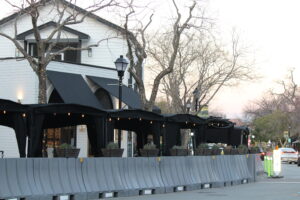 Businesses in downtown Saratoga have set up outdoor dining on the curb of Big Basin Way.

Walking down the streets of Saratoga, it is not uncommon to see once-lively stores now have their lights off and blinds drawn. Occasionally, a sign with some variant of “WE ARE OPEN” is draped across a  store’s front door.

Ten months into the pandemic, many Saratoga businesses have accepted the drastic drop in sales as the new reality and continue to struggle for their survival — and many have shut down. Still, a few local establishments have seen a surprising increase in business.

Reed Animal Hospital, where class of 2006 alumna Katie Reed works as a hospital manager, has seen an increase in business.

“Strangely, the animal hospital is a lot busier,” Reed said. “We think that's probably because people are at home with their pets a lot more, so they have been noticing problems they wouldn’t see had they been at work.”

Veterinarians are doing double and triple bookings in their days to fit in all appointments, she said.

Initially, the veterinarians were not near the front of the rollout plan for COVID-19 vaccines, even though their jobs require working with the public. Many veterinarians signed petitions to express their concerns. On Jan. 8, she received the good news that veterinarians and their staff were added to Phase 1A of vaccine distribution, which includes health care personnel and long-term care facility residents.

The nearby Saratoga Veterinary Hospital declined to comment, but did say they have been busy in recent months.

However, booming businesses are the exception right now.

Amid the mass shutdowns, other businesses are hanging on.

Gautam Agrawal, who works at Argonaut Dental, said they are operating at 20 to 30 percent capacity, using one or two of the four dental operatories.

“We are barely able to take out the cost of this infrastructure,” he said. “In fact, our two neighbors — a gym and a learning center — are gone. It’s pretty difficult to sustain financially, so surviving is what we do.”

Agrawal said telemedicine is not an option for his dental clinic because if patients have problems in their mouth, they need to show up and receive treatment. He can’t merely prescribe medicine to be picked up at nearby pharmacies, he said.

In contrast, the family-owned optical boutique Specs Optical is avidly exploring online avenues. In a virtual fitting, customers receive a consultation and the store mails them frames to try on, said owner Esther Chang. Even so, her business is down about 25 percent.

“Companies like Amazon are pocketing a lot of money while local businesses left and right are shutting down,” Chang said. “So it’s really important to support local businesses that have a community presence. I hope people will gain some confidence in the small retailers that are still here.”

Brian Corral, an instructor at Art Hub Academy, which has seen a 50 percent decrease in business, also hopes customers can have more faith in the good intentions of small businesses.

“I hope people understand that we don’t want customers to get sick either,” Corral said. “On a personal level, our customers are friends, while on a business level, repeat customers are essential and aren’t coming back if they’re sick.”

At a time when keeping a business alive is a struggle, starting one anew is a different story.

Canvy Bui, owner of the boba shop Tea Lyfe, ran her business in San Jose for six years before deciding to expand to downtown Saratoga in late 2019. Before her plan could get rolling, the pandemic outbreak shut everything down and put her in a quandary.

“In April, I told myself that now's the time to give up if I wanted to,” Bui said. “Or it's also the time to do it — to fully open and operate.”

In the end, she hit the ground running and opened the boba shop by August.  Bui said it suffered through a rocky start, and there were days when nobody would walk in. Luckily, many of her old customers from San Jose are still supporting Tea Lyfe.

“Even though we are starting something new here, there's still hope for us,” she said. “We can't be locked up forever.”

Patrick Ruper, whose boutique wine shop Uncorked has seen a 30 percent drop in business, said that wineries rely on the social gatherings such as corporate events and weddings.

Another industry hit hard by the pandemic is the hospitality industry.

The Inn at Saratoga (affiliated with the Hilton Hotels corporation) saw a bit of business during wildfire season in August as they accommodated firefighters and displaced evacuees. Now, they are advertising for customers to book rooms as personal offices for work, said an employee who works in the management and prefers to remain anonymous.

Similarly, the Saratoga Oaks Lodge saw a drastic decrease in bookings. In fact, out of its 24 rooms, only one to two are occupied in a week, said one employee who asked to go by his first name of Mike.

Mike partially attributes the loss of business for the hotels to the closing of wineries and vineyards, the major tourist attractions in Saratoga.

“We're hanging in there,” said Mike, “and we're looking forward to the day when everything gets back to some semblance of normalcy.”