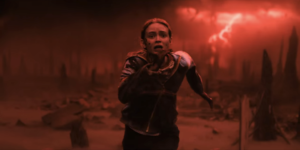 Permalink
The anticipated installment failed some of the show’s original actors, but finds unexpected success in others.

As I lay in my bed one day last summer, I opened Netflix on my computer and filled myself with anticipation as I prepared to watch the long-awaited fourth season of “Stranger Things,” three years in the making. Soon, the familiar and haunting notes of the show’s theme song whisked me away into the town of Hawkins, Indiana.

Despite not watching the show in 2016 because it had slipped under my radar, I heard about the hype surrounding its newest season and decided to binge the whole series. Soon enough, its ‘80s nostalgia, lovable characters and complex storyline had me hooked.

The fourth season, released in two volumes  — the first in May and the second in June — builds upon three storylines and primarily focuses on defeating the powerful being known as Vecna, portrayed by Jamie Campbell Bower, who predictably has plans for world domination.

One thing that stuck with me was the underutilization of Will Byers, Noah Schnapp’s character. His character is an informant and vessel, placed in the foreground when any action is needed: In this season, he alerts the others that the Mind Flayer, the ultimate villain of the series, has returned; however, following this, his character plays no important role

Even so, the sidelining of Byers makes way for other actors in the ensemble cast to shine, especially Max Mayfield and Lucas Sinclair, portrayed by Sadie Sink and Caleb McLaughlin, respectively.

In one scene in episode “Dear Billy,” Mayfield starts to levitate after being possessed by Vecna while “Running Up That Hill” plays in the background to save her from his clutches. As a terrified Mayfield ran for her life, I was on the edge of my seat, desperately hoping she would escape Vecna’s lair. Mayfield’s magnetism on screen during this scene and others made her one of my favorite characters in the show.

Similarly, the writers give Lucas Sinclair, played by Caleb McLaughlin, a well-deserved storyline of his own: His personal struggles regarding popularity and fitting in with the basketball jocks feel like a relatable focus and highlight the fact they are all growing up.

This season welcomes a few new actors, particularly Bower. Vecna is one of the most terrifying villains to come out of the minds of the Duffer brothers, as well as one with the most cultural impact. The prosthetics that Bower put on and CGI used to make the villain come to life in all his terror is impressive. The way he preys upon people with deep emotional baggage, his haunting origin story and his jarringly powerful appearance make Vecna’s place on my list of the best recent villains well-earned.

Predictably, the show has grown its audience exponentially with this release and with that, its expectations have increased as well. In the fifth season, I want to see the original group of kids make a comeback as a group, reminiscent of the earlier seasons.

After one crew was stuck in California, a second in Hawkins and another in Russia for the whole fourth season, seeing them together would be a nostalgic experience. I am also looking forward to seeing Mayfield and Eleven’s relationship develop as they never had substantial screen time during this season.

Despite the sidelining of much of the original cast, the stars that emerged from the cast this season bring a new life to the series. The direction of this penultimate season leaves me with much anticipation for the show’s last installment releasing in another two years.