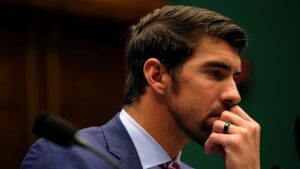 Swimmer Michael Phelps, the most decorated Olympian of all time has ADHD and intermittent depression. After the 2012 Olympics, where he won four gold medals, he contemplated suicide. In a Sports Illustrated article he confessed his mental health struggles after multiple DUIs in the months after the Olympics.

Many of us view professional athletes as idols. They represent aspects of both sports and health that people seek to become and are the positive embodiment of the ideal lifestyle. But contrary to this image, athletes are all too human and sometimes face severe issues with mental health.

The stigma surrounding mental health has prevented professional athletes and regular people, many of whom struggle with depression, anxiety and stress, from seeking help and support.

“It is difficult to address because many people view it as a weakness,” said Kevin Bieksa of the Vancouver Canucks of the National Hockey League during an interview at the National Alliance of Mental Illness (NAMI) convention. His teammate Rick Rypien had died of suicide after years of clinical depression,.

Mental illness is much more difficult to discuss than a physical injury. It’s hard for people to understand what is going on unseen within the brain, causing athletes to keep what is considered a “weakness” hidden.

In recent years, though, leagues like the NBA have begun to address mental health more openly, adopting rules that require teams to add at least one full time licensed mental health professional — a psychologist or behavioral therapist — to their staff.

These new rules have come after star forward Kevin Love of the Cleveland Cavaliers and other players like Trae Young and Robin Lopez, spoke out about their mental health battles caused by pressure to perform well during their NBA careers. Similarly, a retired Boston Celtics point guard, Keyon Dooling, revealed personal stories on The Players’ Tribune, while San Antonio Spurs shooting guard Demar Derozan discussed his own battle with depression with the Toronto Star.

These concerns reach far beyond just the NBA: Former U.S. women’s national soccer team goalie Hope Solo deals with family troubles and was arrested for domestic violence after allegedly assaulting a nephew. Past NFL receiver and current free agent Brandon Marshall has also been public with his mental health problems, as has Bridget Barret, the 2012 Olympic silver medalist for high jump.

For many, the idea that a professional athlete at the peak of their career might struggle with mental problems is difficult to comprehend.

“I think it is important for the public to support athletes who are speaking out because they have been ignored for so long,” senior Siva Sambasivam said. “We often put them on a pedestal and view them as people who are not susceptible to issues like anxiety and depression when in reality our harsh criticisms of them on social media often contribute to their mental health struggles.”

This recent increase in athletes experiencing mental health complications has led many experts to note why professional athletes in particular are more susceptible to mental health issues.

“They are ‘high achieving perfectionists,’” explained David Yukelson, retired director of sports psychology at the Penn State Athletics facility in Pennsylvania State University, in an interview with Fast Company Magazine. “It’s great when it all comes together in victory or a terrific performance, but the toll of perfectionism can be tough when the results don’t match an athlete’s own expectations.”

As more athletes speak out, the public’s perception of mental health is beginning to shift and people are becoming more aware of what many athletes go through on a daily basis. From the pressure to be perfect to the pressure of winning and acting as an impressive role model, athletes have realized they must speak out to change the system.

“We’re not gods. I’m human like everybody else,” Phelps told SI. “Once I started talking about my struggles outside the pool, the healthier I felt. Now I have kids and adults come up to me and say they were able to open up because I was open about my life.”