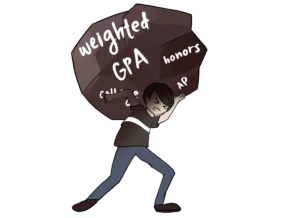 A student shoulders the burden of advanced classes and weighted GPA.

Permalink
Students’ mental health will not improve if the district continues to ignore the issue; it’s time to address it.

Saratoga High students often do not get enough sleep because of piles of homework, cry because of the pressure to get straight A’s and struggle to keep up with all the multiple AP and Honors classes they take. Despite this, there’s been too little action by school leaders to solve the pervasive systemic problem that continues year after year, decade after decade.

The administration and board, as well as most teachers, parents and students, have all acknowledged academic pressure as one of the biggest issues the school faces. Senior Kaitlyn Tsai, an editor-in-chief of The 20-’21 Falcon, wrote in the staff editorial in April saying that mental health issues stemming from academic pressure are “becoming a crisis.” At this point, it’s not even up for debate.

Emblematic of the extent of the problem is the fact that the school has a counseling center — CASSY — in the middle of campus. This past year, WASC evaluators said the school needs to tone down its academic intensity — in response, the school board forced the offering of AP Physics C for next year.

To date, no effective solutions have been proposed, let alone implemented. So here’s a simple yet radical way to address the issue: Remove AP classes from course offerings and discontinue the use of weighted GPA.

Before balking at the idea, take the time to hear the argument.

While almost everyone agrees that an overly competitive academic environment is detrimental to students’ mental health, solutions are often a point of controversy. The most commonly proposed solution to problems concerning academic pressure and worsened mental health is to tell students to stop taking so many AP and honors classes.

But let’s be real. The race to get into the most elite colleges is out of control and ambitious students feel compelled to not lag behind. Any opportunity to take harder classes or achieve a higher GPA is considered an advantage, leading many students to take honors and AP classes they’re not particularly interested in.

The practice has created a grades-over-learning mentality.

The school isn’t forcing students to take hard classes, but rather students are inflicting the pain on themselves out of a perceived need to keep up. There will always be many students who overestimate their capabilities and there’s nothing the school can do to prevent that.

What the school can do is to relieve some of this academic pressure. The academic culture pushes many students to take classes they shouldn’t and overwork themselves, leading to deteriorated mental health. And this culture — largely dominated by AP and Honors classes — is within the control of the school.

Alternatives to the AP path

The AP program was initially created by a committee of elite high schools and Ivy League universities that recommended allowing high school seniors to take college-level courses and receive credit for their work in order to graduate earlier.

In 1955, the College Board began to run the program. The tests eventually expanded to students of all ages, with over 1.2 million students in the national class of 2020 taking AP tests.

The abundance of AP students has led to students feeling pressured to stuff their course offerings with AP classes. But despite the popularity of these classes, the pace and difficulty of AP courses and tests has not fizzled. Rather than providing enrichment opportunities to high school seniors, AP courses have turned many high-achieving schools like ours into mini colleges.

The program has demanded continuous sacrifice, forcing students to pull all-nighters and disregard non-academic passions such as music and sports. And despite the allure of supposed benefits, the program might not help students more than regular classes.

The huge number of AP students in high schools across the country has led to watered down classes. It’s to the point that many colleges don’t fully accept AP credit. According to the Progressive Policy Institute, 86 percent of the top 153 universities in the U.S. restrict the awarding of AP credit. Russel Shaw, principal of Georgetown Day School in Washington, D.C.,  said his school — which abandoned the AP program — was assured by almost 150 admissions officers that students would not be adversely affected by the absence of AP courses and tests.

Most Saratoga alumni do not graduate from college early, despite taking many AP courses. Courses like AP U.S. Government & Politics and AP Computer Science are often much less comprehensive than their college counterparts, so students often retake classes they’ve already taken in high school. While there are some AP classes that prove useful in college, losing that credit is a small price to pay to lessen the school’s toxic academic pressure.

Removing AP classes wouldn’t deprive advanced students of opportunities to challenge themselves. Honors classes would still be available and new ones could replace AP classes. Instead, students would be relieved of unnecessary pressure and teachers would be given freedom to improve and adapt their classes.

End the use of the weighted GPA.

To students, one of the major benefits of honors and AP courses is the 5.0 GPA point. While standard classes are graded on the standard 4.0 scale, qualifying advanced classes are worth up to 5.0 points on the difficulty-weighted scale. During the college admissions process, the school reports both weighted and unweighted GPAs.

Predictably, students want their GPA to be as high as possible — even if their unweighted GPA remains unaffected. This leads to students prioritizing a superficial number over their academic interests and — of course — mental health problems.

According to guidance counselor Eileen Allen, far more students take English 11 Honors than standard English 11 — there are seven sections of the Honors class and two sections of the standard class this year. Despite this, only a small minority plans on majoring in a subject in college that is remotely related to English. It’s safe to infer that some students are not taking English 11 Honors because they love the subject (though many do), but mainly to get the GPA boost. The same goes for many other AP and Honors classes.

So here is another simple solution to the stress problem: Take away the weighted GPA.

Now, the obvious complaints: Students will be disadvantaged against students from schools with weighted GPAs and will be unfairly judged by admissions officers.

The reality is that students’ chances at getting into colleges will be virtually unchanged. Most colleges recalculate GPA due to discrepancies in GPA calculation between schools. For example, UC Berkeley disregards freshman grades. The University of Washington, among other schools, does not accept weighted GPA.

Marybeth Sacramone, guidance coordinator of Wayland High School in Massachusetts, reached out to colleges to see if her students would be disadvantaged if the weighted GPA was taken away. All 100 colleges that responded unanimously said weighted GPA makes no difference in the admissions process.

Without the weighted GPA, students would continue to be rewarded for their hard work just as they are now. Colleges will prefer a 4.0 student who took the hardest classes that their school offered over a 4.0 student that took the easiest classes.

But removing the weighted GPA brings about benefits that the school currently lacks.

Student mental health would be improved without the pressure to take classes for GPA improvement.

Also, some elective classes (like journalism, which you should totally join) demand a lot of work and dedication from its students but aren’t on the 5.0 scale, making it unfair for the students that take them. Grading all classes on the 4.0 scale levels the playing field and allows colleges and students to decide which classes they value most.

The district must consider these options to solve our mental health crisis.

The school is facing a mental health crisis and the district must take real action to solve it. The ideas in this article — in tandem or alone — will help address and reduce the problem.

The district should create an exploratory committee to see if these solutions are practical for our schools and study the effects of such changes in-depth. This will seem like an outlandish idea to some, but this kind of conversation is long overdue — the possible benefits are too important to ignore.

The district should reach out to schools who have made big changes like this for the sake of students’ mental health and ask them how the change has helped or worsened the problem. They should seek input from teachers and students. If the district finds these solutions to be effective at solving the mental health crisis, they should implement them no matter the opposition.