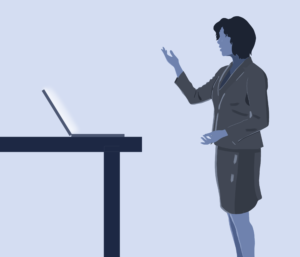 Photo by Graphic by Joann Zhang

Technology and communication challenges make it harder to learn and grow.

This year, the old routine of stepping into Room 704 or the English office every Tuesday and Thursday night for practice is gone for speech and debaters. The new normal includes clicking a Zoom link and being sorted into breakout rooms.

But for novices, the virtual experience is all they know of high school speech and debate, and the learning process has been slower in this format, which has added to the confusion of an activity that many already find hard to navigate.

One challenge is learning the respective events and choosing which to compete in.

Sophomore Sofia Schmitt said she initially wanted to do Original Prose and Poetry because she loves creative writing, but soon learned that the event is not recognized nationally. So Schmitt switched to Dramatic Interpretation, only to achieve less than satisfactory results at a novice tournament.

“I didn't expect interpretation events to be so focused on acting and less on how you draft your speech,” Schmitt said. “Speech and debate has been up-and-down because I had no idea what I was doing.”

Schmitt settled on the event Original Oratory, and confronted the challenge of writing and memorizing a 10-minute speech that is both informative and entertaining. Afterwards, Schmitt kept re-recording her speech in an attempt for perfection, resulting in one night when she recorded until 4 a.m.

Despite committing so much of her time, Schmitt knows that she will have to learn to present her speech all over again once the tournaments go back to in-person because presenting live to the judges makes everything different, including her emotions, she said.

Schmitt said the virtual speech season was especially daunting due to the level of competition she faced at tournaments and the accomplishments of some of her peers.

“I feel lost because everyone is so good and I’m just supposed to jump in,” Schmitt said. “The people I'm competing with and the people around me are doing really great things, but luckily they’re all very nice and friendly.”

Some newcomers, however, have seen success early on. At the Coast Forensics League (CFL) Novice Tournament on Nov. 8, freshman Esabella Fung was ranked first in all of her Original Advocacy rounds, a phenomenon known as “picket fencing” in the speech community.

In middle school, Fung spent a year in debate, but decided to transition to speech this year. She chose the event of Original Advocacy because she is passionate about the Paycheck Fairness Act, which addresses the gender wage gap. She then put a speech on the topic together with the help of one of the captains, junior Harshini Velchamy. Despite the online nature of practices, Fung said she has learned a lot in speech.

“It’s been really fun so far and really enlightening,” Fung said. “I wouldn't say online practice makes our connections distant because I'm comfortable asking questions and talking to other people.”

Still, she said she hopes to experience the competitions in-person soon. Fung has heard about the closeness within the speech and debate community, such as when competitors lend each other a hand at tournaments. She also looks forward to connecting with students from other schools.

On the other hand, novice debaters faced a myriad of misunderstandings in the new virtual format. Freshman Minh Do, who participates in Public Forum debate, said the necessity of real-time interaction in debates made debate much harder to do online.

“I'm a little uncomfortable with online tournaments,” he said. “I've never been to a high school speech and debate tournament in person, so it's hard to get the full experience online. It's quite intimidating.”

At the CFL 1 Debate Tournament on Oct. 18, Do said the judges also struggled with technology issues, and would read his body language and facial expressions incorrectly because all they could see was his head and shoulders.

“One judge called me ‘condescending’ because I kind of plastered on this fake smile the entire round,” Do said. “It's a lot more awkward to compete online because judges can't actually tell your true personality and expression.”

Even with all these tech issues, Do said he is impressed by the organization of the club and is satisfied with the virtual practices, led by novice Public Forum coach Stanford sophomore Kate Selig. To compensate for lack of actual interaction in an interaction-based event, Selig holds practice debates and one-on-one discussions in breakout rooms.
“Through speech and debate, I would like to make myself more competent in public speaking because it is important in higher education and the workplace,” Do said. “I’m glad it’s not any less of a program online than in person.”