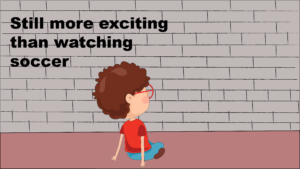 Permalink
I would rather watch paint dry than watch soccer players aimlessly pass the ball around the field and pretend to get injured.

The 2018 World Cup Tournament lasted nearly two hours, but within 30 minutes I decided I had had enough of this monotonous sport. Soccer’s dreadfully slow and repetitive characteristics, like the aimless passing and countless fake injuries, have made it difficult or impossible for me to watch.

Oftentimes, winning the game and entertaining viewers seem inherently at odds with each other.

Most of the game consists of players trying to tire their opponents out by constantly passing and making the defense chase them around the field. Even after a (possibly) exciting goal, it gets worse, since if one team is winning, they often attempt to run out the clock by wasting time passing among themselves rather than trying to score more goals. The ratio of time wasted spent passing the ball around to when a goal is made is extremely upsetting.

The fact that soccer games can also end in a tie makes matters worse. Imagine slogging through 90 minutes of a game where nothing happens, akin to watching paint dry, and then nobody reigns victorious in the end.

Sadly, the main source of entertainment in soccer games is not the sport itself, but when someone tries to fake an injury.

It cracks me up every time I see a soccer player pretending to be in inexplicable pain, rolling around on the soccer field, when in reality they were barely even touched. Players’ overreactions and faked injuries in an effort to draw penalties on opponents are arguably more engaging than watching players score a goal.

Instead of enduring 90 minutes of boredom, it’s better to watch the highlights instead so you can still see the two minutes of real action out of the hour and a half of tedious play.

While soccer players are undoubtedly some of the fastest and best athletes on the planet, the game itself is so unbearably slow that it is not worth wasting your time.