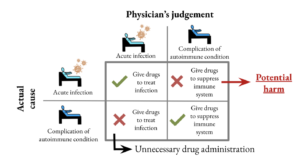 Over the summer of 2020, senior Riya Gupta attended Stanford’s Clinical Summer Internship (CSI) program, where she listened to various keynotes led by the most renowned names in the medicinal field.

Gupta was intrigued by a particular lecture regarding autoimmune and infectious diseases presented by a Stanford professor named Dr. PJ Utz. Gupta rapidly jotted down notes and pondered how she could formulate a gene signature, a unique genetic pattern to certain conditions, to streamline the process of identifying disorders.

Afterwards, Gupta studied Utz’s work and stumbled upon the Khatri lab directed by another Stanford professor, Dr. Purvesh Khatri. Gupta later applied to intern for Khatri in August of 2020.

Beginning work that fall, she was soon doing hands-on lab work and helping the scientists.

The work led her to do a project that enabled her to become one of finalists in the virtual version at the 2021 International Science and Engineering Fair (ISEF).

During her initial research, Gupta was particularly impressed by one of Khatri Lab’s ongoing projects, “Healthy Immune Response Project,” which aims to delineate the differences between healthy and diseased immune systems through the analysis of patient data on 23 disease groups.

Gupta was tasked with analyzing the data to find similarities beneficial for further research. Through the process, Gupta promptly noticed similarities between autoimmune and infectious diseases.

Over the course of the project, Gupta struggled with the right approach to take: statistical models or machine learning models.

“At first, I tried running multiple machine learning algorithms, but they all yielded inaccurate results, so I looked toward statistical models,” Gupta said.

She found that statistical models produced more accurate results because they allowed for less variability and were better suited for finding data points deviating from the norm, compared to machine learning models that attempted to find patterns between the data points.

Following the gathering and analysis of the data, Gupta formulated gene signatures, which are useful in prognostic and diagnostic procedures.

Additionally, Gupta said she especially enjoyed the researching process, as she was able to work with experienced mentors such as Aditya Rao, a current graduate student in Stanford’s immunology program who helped guide Gupta along the way.

With her research, Gupta competed at Synopsys in March, a regional science and engineering fair, and won the grand prize for biology. In a pool of over 900 contestants, Gupta placed within the top 15 and qualified for the ISEF.

After four rigorous rounds of judging, Gupta made it into the finalist category. Looking ahead, Gupta hopes to continue her research as she heads to college and future career paths.

“Despite the fair being, sadly, online, I was able to connect to the brightest minds from around the world and tap into the knowledge from their personal projects,” she said.