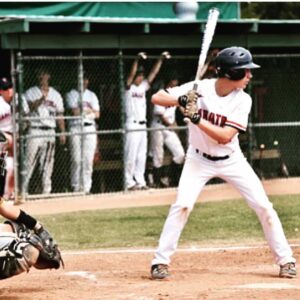 As he dove to catch a throw, Gilligan felt the weight of another player fall directly on his leg and instantly heard a snap. Determined to move to the next play, Gilligan tried to get up, but knew something was horribly wrong.

It turned out Gilligan had broken his femur, the longest bone in the body, extending all the way from the hip to the knee joint. More serious than a simple bone fracture, Gilligan’s leg required intensive surgery involving inserting screws into his knee.

“At first, I told myself I was fine, even as I was getting carried off the field on a cart because I couldn’t walk,” Gilligan said. “I didn’t realize how serious the procedure and recovery were going to be.”

During his 8-month recovery period, Gilligan dedicated three days a week to intense physical therapy. Trainers came to Gilligan’s house to help with rehab, aiding him with regaining range of motion in his knee.

Four months after his surgery, Gilligan was cleared to begin weightlifting and running.

“The initial recovery was a super extensive process because I couldn’t even bend my knee,” Gilligan said. “I went from basically having no range of motion to slowly working my way back to normal.”

Although his doctor estimated Gilligan’s recovery to take a full year, Gilligan was cleared to return to full contact after only eight months. He credits his efficient recovery to the constant support of his friends and family.

In the first three months after his surgery, Gilligan was in a wheelchair while learning how to walk again. He acknowledged the initial discomfort in going to school in a wheelchair, but the help of his friends made the transition a lot easier.

“It’s definitely weird coming back to school in a wheelchair and having everyone notice it,” Gilligan said. “But my friends being there to push me around and carry my things really helped me stay optimistic throughout all the rehab.”

Gilligan admitted that the journey to recovery was not easy. When he would watch his teammates play without him from the sidelines, he truly realized the extent of his injury.

“When I still had my cast on, I didn’t notice how immobile my knee was,” Gilligan said. “But as soon as I took it off and wasn’t able to bend my knee, I felt helpless.”

For the most part, however, Gilligan was adamant in staying positive throughout his recovery, constantly goal-setting in order to keep moving forward. For example, Gilligan focused on being cleared by baseball season, and he was successful in reaching this goal by the spring, though the season was shortened because of the pandemic.

Eight months later, in May, Gilligan was cleared to play full contact sports, and since then, he has returned to playing football and baseball. Gilligan said he remains a confident athlete, blocking out negative thoughts about reinjury during games.

While there are moments during weightlifting where he fears that something will happen to his knee again, Gilligan believes that positive self-talk has an impact on staying physically healthy as well.

“I think the reason I was able to return to full contact was because I set so many goals for myself, and I would tell other injured athletes to do the same,” Gilligan said. “I was told that I might not ever get to play football again, but I knew that I was going to get back. I just had to focus on how to motivate myself to get there.”