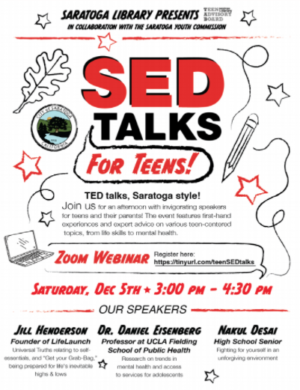 As senior Nakul Desai logged onto the Saratoga Library’s TED-style SED Talk seminar on Dec. 5, he was rethinking his decision to share his experience with mental health in front of a group of strangers.

Seeing that there were more than 40 students and parents on the call, Desai started to feel the pressure as he prepared for his speech about how the academic toxicity in the Bay Area damages students’ mental well-being.

A few weeks prior, the Saratoga Library had reached out to Desai, asking him to prepare a 10-minute speech for their “SED Talks for Teens: Overcoming Obstacles” panel. With the help of the Mental Health Initiative, a nonprofit that Desai is actively involved in, he created a speech that he hoped would bring attention to the subject.

In his speech, Desai emphasized that students in the Bay Area often obsess over their grades and prioritize higher numbers over actually absorbing the taught material. He added that this mindset causes students to put too much pressure on themselves, which is extremely harmful to their mental health.

Desai’s speech came from personal experience. He described struggles with his own mental health that he has had since fourth grade. Eventually, Desai reached out to medical professionals for help. Seeing what this did for him, he started to encourage his peers to utilize their resources as well.

Desai’s speech received an enthusiastic response from his audience, and many listeners even reached out to him afterwards, thanking him for validating their emotions.

“I decided that I was going to be as genuine and honest as I could,” Desai said. “I tried my best to put my raw emotions and feelings in the speech, even though that was really hard to do.”

Desai also praised the supportiveness of the school’s administration in prioritizing its students’ mental health. He also knows that several of his friends recommend CASSY, as talking to any trusted adult can be helpful.

“I understand that opening up to parents can be a struggle, even if they’re trying to do the right thing,” Desai said. “But making the choice to talk to someone you trust, even though it’s a hard thing to do at first, is something that you’re definitely not going to regret in the long run.”

Although the school provides numerous resources for their students, Desai said students’ holistic perceptions of school need to shift in order for the school to see a widespread improvement in mental health. Instead of the school’s grade-obsessed culture, Desai hopes to see a shift to a more balanced workload and mind-set.

Desai, understanding that this is a large issue to address, is proud of his courage to speak out about his own experience with mental health.

“In the past, when people found out I struggled with mental health, they would classify me as this ‘unsaved crazy kid’ and ‘lazy,’ which felt terrible,” Desai said. “Even though giving a speech was difficult, I could potentially save another kid from having to deal with this stuff. It was completely worth it.”