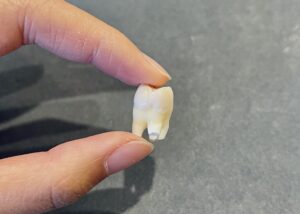 Surprised by the size? The roots were even longer before they broke

My misery was caused by a tiny hard speck on the top left region of my gums in the very back of my mouth. When I first noticed it, I shrugged and dismissed it as a bit of food.

A few days later, when it was still there and had gotten bigger, I had a realization: An unruly wisdom tooth was growing crookedly from the side of my gum. A visit to the dentist confirmed my suspicion and I scheduled an extraction surgery.

Any wise person would probably contemplate: How exactly would a mostly-buried tooth be pulled out from one’s gum?

I was not wise.

I adopted my post-Calculus test strategy: If I didn’t think about it, it didn’t exist.

On the day of the surgery, my attempts at denial were thwarted by my mom’s concern. As I lay down on the dental chair, my cheek half-numb, my mom decided to ask Dr. Kim about the procedure in excruciating detail. I was informed of how exactly he would slice open my gum into “flaps,” a mental image that made bile rise from my stomach.

Worse, my mom decided to make small talk by fact-dropping how King Louis XIV had bits of his jawbone pulled out by careless dentists. Shut up, mom!

Likely sensing my horror, an assistant shoved a rubber duck into my hand.

“Squeeze it if you get nervous,” she said placatingly.

Awkwardly holding the stupid, stupid duck and glaring at her turned back — I never knew scrubs could radiate such condescension — I surrendered my oral cavity to the dentists’ schemes.

In retrospect, I should have done my research and known that a normal surgery to extract all four wisdom teeth is done under general anesthesia and with stitching afterward, so there’s minimal trauma and bleeding. This was not the case for my single-tooth extraction (I couldn’t have all four pulled out because of insurance policies) as it only required local anesthesia.

Fully awake, I watched as Dr. Kim lowered a fiendish scalpel into my mouth, its razor sharp edging glistening under the bright light. Then, there was pressure.

I felt no pain, but the horrendous scraping noise (imagine nails dragging down a chalkboard and multiply that by the sound of your cat scratching the window) was enough to tell me exactly how the scalpel was slicing open my gum, its tip dragging over the hard tooth underneath.

Once my gum was flayed open, Dr. Kim and his assistant burst into a flurry of movement. Clamps and other dubious instruments entered and exited my mouth at remarkable speeds. Within 30 seconds, it was over, and I was told to bite down on a gauze pad.

Disoriented, I turned and found my wisdom tooth lying limply in a small puddle of blood with its three long roots. Oh goodness, I thought faintly, I have a hole of that size in my cheek.

I made it home in a haze and, because I unwisely chose a Tuesday for the surgery, started to study for the next day’s AP Lang test. Feeling dopey because of anesthetics and with the confounding philosophies of Russell, Plato and Descartes swirling around my head, I somewhat registered the sweet taste in my mouth but attributed it to a flavored gauze pad. Two hours later, when I removed the gauze pad as instructed, I discovered the source of the strange taste: my blood.

I really shouldn’t be surprised — of course a gaping, unstitched hole in my flesh would keep on bleeding.

So, for the entire night I pored over convoluted philosophical texts while tasting my own blood, my jaw aching as it oozed not-so-slowly from my gum.

Despite what Descartes might think, I know a certain truth: Dressing up as a vampire for Halloween is forever crossed off my list — tasting blood for hours is not fun at all.