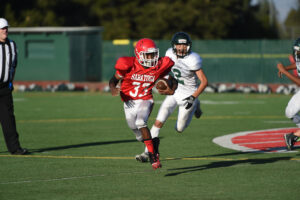 2017-2018 recap: disappointing season with only one win against winless Los Altos

The Falcons suffered disappointing losses one after another last year before finally pulling through and trouncing Los Altos 41-12 in the final game. A few of the team’s games last year were close until the fourth quarter, when the team could not come out with the win.

This year, after moving down to the El Camino Division.The Falcons are looking to control in a division filled with teams that lack the talent of perennial powerhouses like Los Gatos, Wilcox and Milpitas.

One game to watch is the Homecoming game against Santa Clara to be played at Levi’s Stadium on Sept. 21. Although Homecoming games are usually played against one of the weaker opponents in the league, Santa Clara is not a team to expect a sure-fire win against, especially given the nerves that will come with playing on the 49ers home field. Another notable game is at annual rival Los Gatos on Sept. 14, which will not count toward league standings as Los Gatos is in a different league.

This year, the varsity football team is not one to look down on. Two years ago, the JV team achieved a 6-4 record in the upper division, beating Los Gatos in the process. Last year, they had a record of 7-3, beating Los Gatos once again. Clearly, the players has tasted its share of wins and looks to be able to repeat the success they’ve had previously at the varsity level.

“We have a lot of younger players this year, but we’re all well coached and ready for this season,” senior running back JJ Wang said.