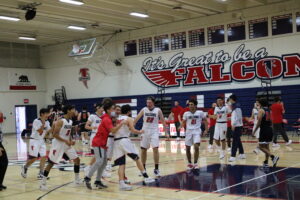 The team swarms junior Christian Li after he scores a three-point buzzer-beater to end the second quarter in a game against Los Gatos on May 1. The Falcons ended up winning the game 54-38.

Senior Jane Loo, a point guard on the girls’ basketball team, fondly recalled her team’s annual dinners at Benihana with former head coach Danny Wallace. Their yearly tradition was to tell the waiters that it was Wallace’s birthday to get a free cake, with the girls rounding up his age between 10-15 years.

After four years of working together and making valuable memories, the team’s seniors missed their last chance at winning championships in the Central Coast Section (CCS) playoffs because of the pandemic.

According to a CCS press release on April 26, the California Interscholastic Federation (CIF) granted approval for some sports to participate in CCS playoffs, including boys’ and girls’ soccer, team tennis, boys’ volleyball, boys’ and girls’ basketball, boys’ and girls’ lacrosse, baseball and softball. However, after a unanimous decision by the Santa Clara Valley Athletic League (SCVAL) on April 29, these teams have been withdrawn from postseason play.

This year, all sports were assigned to go along with the California COVID-19 tiers, and as counties hit certain colors at the start of each sports season, the respective sports were allowed to begin. While CCS split sports into two seasons this year, the SCVAL split sports into three seasons. They held low-risk sports in Season 1, moderate risk sports in Season 2 and high-risk sports in Season 3 to best preserve athletes’ chances at being able to play a whole season. However, because of the conflicting CCS and SCVAL schedules in some sports, this disqualified its 14 member schools, including Saratoga High, from CCS play.

According to the Mercury News, other reasons SCVAL cited for opting out of CCS included potential Title IX issues and the fact that CCS will run until mid-June, past the end of the school year when school administrators have scheduled vacations.

The decision to forgo CCS has caused confusion among athletes as all other leagues were cleared for postseason play, and elicited disappointment from players, mainly seniors, who will miss out on their final opportunity to participate in the playoffs.

“We were so close to winning [the bracket] in previous years,” Loo said. “We wanted to end high school basketball on a high note, and by taking away CCS, we don’t get a chance to achieve our goal that we’ve worked towards these past four years.”

Senior guard Justin Guo, who has consistently missed out on CCS during his playing career, echoed the same frustrations. He played JV in his freshman and sophomore year, and was out with an injured elbow for his junior year, making this his last chance at partaking in the playoffs.

While he was disappointed, he said he “got over it fairly quickly,” as the possibility of having a sports season at all was uncertain at the beginning of the year due to COVID-19. He said reflecting on the status of the season in the fall has put the current situation into perspective, and has helped him focus on what he can control: doing his best to help his team win the rest of their league games.

Despite this, he feels he missed out on the chance at playing additional games with his teammates.

“It's crazy to think that I have a numbered amount of games and practices with my teammates before the end of my high school basketball career,” Guo said.

Although the team cannot take part in CCS, athletes for the most part have chosen to focus on the positives of playing a season at all in a year when that was uncertain.

“It's cheesy, but the biggest thing I've gotten from sports is the memories and relationships with my friends,” Guo said. “More than any point I've scored or game we've won, the intangible friendships and energy and after practice hangouts are the experiences that will always stand out to me as I move on in life.”