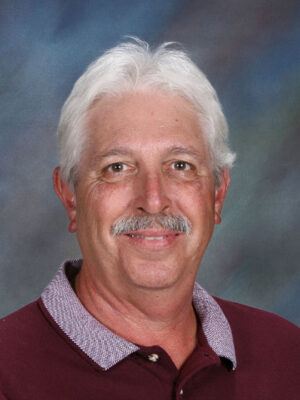 Every morning at 6:30 a.m., gardener John Berti deactivates the school alarm, opens up the bathrooms and begins watering the plants. After he’s done with all his gardening work, he goes through the hallways to help with the trash. However, Berti is more than just part of the maintenance staff.

Berti has cleaned, repaired and beautified the school for 23 years. He has seen the school develop a high quality concert hall, a well-kept football field, and even a state-of-the-art Media Arts building.

“Me and the whole crew did a lot of work [over the years]. We enjoyed it. If we didn’t, we wouldn’t be here,” said Berti. He smiles, adjusts his sunglasses, and points out the differences that they made around the school, such as the newly decorated Room 804 and the new water fountains.

But Berti has other interests besides taking care of the school—ever since second grade, Berti has played the drums.

“I came home one night and told my mom that I wanted to play an instrument. She immediately said, ‘Play the drums! Then if you have a cold it doesn’t matter; you can still play.’ My mother was a character,” said Berti.

Growing up in New York City, Berti learned Jazz drumming and rock and roll as a studio musician. He even played in a few bands called Bull Angus and Gypsy Rose.

“It was a lot of fun, and I did that for a long time,” said Berti. “Growing up, I wanted to be a professional drummer, but it’s so hard to get in. Even [getting] to record music was tough. We recorded a few albums locally and sold them in our hometown, and we thought we were going to become all big and great.”

Even though Berti didn’t quite make it big, he still loves playing the drums.

“Sometimes I go up to the music room and bang ‘em out,” said Berti. “Over the summer, I was there by myself with my headset on playing the drums. Michael Boitz comes in and takes a picture of me, sends it off to John Zarco. I didn’t think anybody was around!”

Boitz often invites Berti to music department events because of his interest in drums.

Besides music, Berti also has a hidden passion for golf, which he has played since age 8. On weekends, he plays in the Stanford Medical Hospital Men’s League.

Berti’s penchant for fun is evident in his friendly demeanor and in his “refreshing” attitude towards his job. Often, Berti can be seen joking around with the staff on campus.

Evidently, Berti has many fond memories at Saratoga High, including the graduation of his daughters from the school in 2000 and 2003. But he sees retirement happening in the next few years.

“I like the freshmen coming in this year because when they graduate, so do I. After 26 years, I’m gonna retire,” said Berti. “We [the custodians] just want to leave our little mark before we go. You’re only as good as the last day you work. Then you can look back and say, ‘Hey, I did that!'”