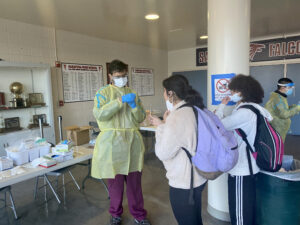 Permalink
In response to a sharp increase in cases due to the omicron variant, the school has mandated weekly testing for students and staff on campus.

Note: Statistics in this story were last updated on Jan. 21.

Following the return from winter break, the school experienced a large uptick in COVID-19 cases due to the omicron variant. Before the return to school on Jan. 3, at least 29 students and five staff members had initially tested positive, assistant principal Brian Thompson said.

The weekend before, the district distributed over 1,000 free at-home rapid testing kits to gauge the spread of COVID-19, a precaution to combat the rise of the contagious variant as students and staff traveled during the break, Thompson said.

The district also increased on-campus PCR testing opportunities with Inspire Diagnostics. Because many students and staff were considered to be close contacts, over 1,000 PCR tests were administered the week of Jan. 3-7, and over 1,300 tests occurred during the week of Jan. 10-14. Although district policy changed on Jan. 15 to consider all students and staff who regularly visit campus to be close contacts, during the first two weeks, students identified as close contacts were asked to test twice — one test as soon as possible and another five days after.

With the rise in cases, multiple on-campus activities have been affected — including the varsity boys’ basketball team having to postpone a game against Los Altos on Jan. 7, due to two positive cases. Increasing teacher absences, especially at Los Gatos High, have also exacerbated an ongoing substitute teacher shortage; a district email sent out by superintendent Michael Grove on Jan. 15 implored parents with bachelor’s degrees to apply as emergency substitute teachers.

In the same email, the district announced that all students and staff who come to campus are now considered close contacts. Thus, the school has shifted its COVID-19 exposure policy; students will no longer receive emails if they are exposed to a positive case.

This policy revision is in accordance with the California Department of Public Health’s Jan. 12  guidance update for TK-12 schools with wide-scale exposure and the Santa Clara County Public Health Department and Office of Education’s Jan. 14 decision to consider all on-campus individuals close contacts.

“The volume [of close contact notifications] has become unmanageable and quite honestly, given the frequency of these notifications, they have become meaningless in practice,” Grove said in his announcement.

This policy change stems from instances such as Jan. 11, where over 800 students and staff were tested at school as a result of being in close contact. However, with limited time slots to test, students were forced to wait in long lines and often missed a significant amount of class time. In science teacher Cheryl Lenz’s first-period Chemistry Honors class, for instance, over half the class raised their hands when she asked for students who needed to take a PCR test that day.

Lenz decided to send them to wait in line near the beginning of class, “mistakenly thinking they could get ahead of everyone else,” she said. As a result, the majority of Lenz’s students missed over half an hour of class, due to long lines snaking around the small gym and through campus hallways.

To accommodate students who were testing, Lenz had to reschedule a quiz for the next class. She also recorded herself working on example problems to post on Canvas for students who had missed class.

“There was a little stress because the main thing I really wanted to make sure of was to get to the lab that I couldn’t postpone,” Lenz said.

Though long waiting times disrupted her plans, Lenz believes the school has done its best with testing under the circumstances, she said.

“If we had PCR testing daily, then we could schedule it and have different grades or classes test at different times,” Lenz said. “That’d be great. But because Inspire Diagnostics is only here two days a week, they’re trying to squeeze everyone in during those times.”

Besides Lenz, many students found the long wait times to be inefficient. Sophomore Hannah Munson found the close contact testing system to be “tedious and frustrating,” stating that being gone from class caused students to miss important class material.

Though testing times take place during school, the majority of those hours are during class. She feels that even if a teacher permits students to get tested during their class, being gone for a short amount of time from class can still cause students to miss important information.

“Having only two days [of testing] likely adds to the delay in when results get back,” Munson said. “If results start taking more than 36-48 hours to come back, that’s still enough time for someone who is positive to go to school and possibly spread COVID. Seven hundred tests on one day versus 300 tests over the span of two or three days could probably make a major difference.”

On the other hand, senior Parsa Hashemi found the school’s COVID-19 testing process to be “rather quick and easy.” He believes that mass testing did “a decent job of keeping the student body safer than we would think.”

Sophomore Maithreyi Bharathi, who tested positive through a rapid test distributed by the school on Jan. 4, added that increased testing was an important preventative measure.

“I’m glad that both the PCR and rapid tests were free,” Bharathi said. “Because the school was asking everyone to test, a lot of cases were revealed, preventing more people from becoming infected.”

Munson much prefers the new weekly testing model over the close contact system.

“I think it is better than the close contact testing because it holds opportunities to have better-spaced testing days which would hopefully allow for faster test results,” Munson said.

In addition to weekly testing, Grove’s email reported that the district has received “significant quantities” of N95/KN95 masks. They have enough to last the next two months and are expected to receive more, Grove said. Masks are mandated on campus, and the district strongly urges students and staff to use N95/KN95 masks to effectively protect against airborne virus transmission.

On Jan. 21, the school supplied each student with two N95/KN95 masks during sixth period, each to last one week. The district plans to repeat the mask distribution cycle every two weeks, with replacement masks available in the office.

Munson believes that providing N95s is a good move on the district’s part to support those who cannot buy the masks themselves.

“Of course, the distribution does not mean everyone will wear one or that the spread of COVID-19 will necessarily change, but it’s still a good decision,” Munson said.

While he believes that a surge in positive cases is inevitable, Hashemi approves of the administration’s efforts in giving free rapid and PCR testing opportunities.

“‘The school should definitely keep doing what they’re doing; the problem is just that [they] can’t force kids to take the test,” Hashemi said. “I’m sure a lot of kids unknowingly have it or just don’t want to speak up about their symptoms. So a way to crack down on the truths of people’s symptoms and for people to take it more seriously would be ideal.”