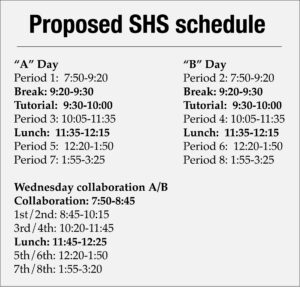 Los Gatos High has already approved the switch to a full block. SHS teachers are still discussing the schedule.

A schedule that would make every day a block day and eliminate the “Monday problem” is under consideration for next year.

The proposed schedule, according to assistant principal Brian Safine, would be an A/B system where students would alternate between periods 1, 3, 5 and 7 and periods 2, 4, 6 and 8 on consecutive school days. Some weeks a class would meet three times, while the next week it would meet twice. The periods would continue to be 95 minutes long., and a fourth tutorial would be added to the week.

Many students say Mondays, when all seven classes meet, create too much homework and tests to study for on weekends.

“I would prefer the full block simply because it reduces the weight you have to carry on Mondays and creates more freedom for your classes and more time on the weekend to do your recreational activities,” said sophomore Vance Lindholm.

According to Safine, teachers are still debating the pros and cons of a full block schedule. The next step will be to bring the topic to the department chairs and then seek support from the teachers’ union. If sixty percent of the school staff votes for the schedule, the new system will likely be implemented. Nearby Los Gatos High has already approved the switch to a full block schedule next year.

“There must be momentum to change,” said Safine. “The staff would need to come to an agreement on exactly how the schedule would look like.”

Assistant principal Joe Bosco believes that the advantages of the new schedule include “relieving some pressure for the students,” “making the schedule more understandable” and the embedding of four tutorials per week. Also, the addition of an eight period would mean that student athletes with seven periods would not have to miss any class time. Teachers have raised concerns, however, about the potential disadvantages of such a schedule, including only seeing their students for two days every other week.

“Some teachers are adamantly against it and some have good talking points for it,” said Bosco. “It depends on who you talk to.”

According to principal Jeff Anderson, the foreign language and performing arts departments are traditionally opposed to the full block, although some teachers in these departments prefer it.

“Languages and math usually want shorter classes and as many contacts per week as possible,” said Spanish teacher Bret Yeilding. “I personally taught in the full block schedule, and I would prefer it, but there are plenty of teachers in my department who would not.”

Teachers have mixed feelings about moving to a full block schedule. According to administrators, there is no general consensus on the new schedule and opinions vary widely.

“I’d like the consistency because the times are all even and I’d also like the four tutorials,” said history teacher Matt Torrens. “But I don’t like the fact that it’s less time with students on some weeks, so it may not be convenient to some teachers.”

Safine said that the likelihood of a switch to the new schedule is still unknown and the school might stay with the current schedule. He also said the conversation about a new block schedule is nothing new and something that has been occurring for the past couple of years.