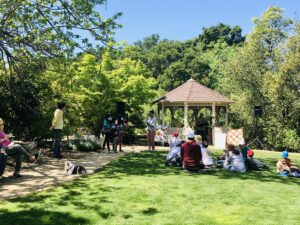 Permalink
Drawing crowds from around the Bay, the festival showcases local craftsmen and organizations to highlight Saratoga’s rich history.

As cars lined the block along Fruitvale Avenue on April 9, excited attendees headed towards the Heritage Orchard and Civic Center for Saratoga’s annual Blossom Festival, which “commemorates and preserves the memory of its historic celebration of Saratoga’s agricultural and community-focused life.”

The first Blossom Festival dates back to 1900, when, following a 2-year drought, Rev. Edwin S. Williams (often referred to as Sunshine Williams) invited people from across the Bay Area to see orchard blossoms and celebrate the end of the drought. Attendees spectated athletic events, explored garden tours, drank Congress Springs water and enjoyed prunes in milk.

For the first two years, the festival was held at Oak Street school (now known as Saratoga Elementary), and due to its growing popularity — 20,000 people once attended one year — the festival moved to larger locations such as downtown. The Blossom Festival was hosted annually until 1941, when it was paused due to World War II, and started up again in the 1950s.

Now, following a 2-year hiatus due to the pandemic, this year’s Blossom Festival, hosted by the Saratoga Historical Foundation and sponsored by the City of Saratoga, featured antique cars, live music, petting zoos, and food trucks. It also showcased the work of various local artists and craftspeople, including Campbell-based Alyssa Cillooley.

This year was her first time at the Blossom Festival. Her booth featured an assortment of handmade polymer clay designs, ranging from bowls and jewelry to figurines and hand-painted glassware. Her products sold for anywhere between $3 for a mini wallet to $125 for a tall fruit bowl, though most resided in the $15 to $30 price range.

Cillooley has worked with polymer clay for 13 years. She was initially inspired to work with polymer clay after seeing an exhibit where a woman showcased clay works and the process of making a cane — a log of clay made with a design running its entire length. When sliced, the log creates pieces with identical designs.

“I was just fascinated by it,” Cillooley said. “So I got online, and I started watching videos and reading tutorials. It’s through a lot of practice that I came to do what I do.”

She initially created clay-creations as a hobby, never selling what she made; however, after two years, she created an Etsy shop, ClaydeLys1, to sell her products.

Her creative process starts with gaining inspiration from other artists’ works: When she sees a piece that looks fun to make, she creates her own rendition of it.

To create her clay works, she first manipulates polymer clay into canes. Each cane — which, depending on the complexity of the design and number of colors used, can take anywhere from one to six hours — can typically be incorporated into three or four different works. Once the canes are completed, Cillooley slices and either molds them onto pre-existing objects or creates works made entirely from clay.

“[Working with polymer clay] is not necessarily hard, but you need practice,” Cillooley said. “The first few things I made were just horrendous, but [I told myself], ‘Don’t quit, just keep going.’”

Her favorite work showcased at the Blossom Festival was a mannequin covered in colorful polymer clay canes. She incorporated different canes for each section of the mannequin’s arms, legs and torso because she “wanted more of a playful design.”

In the past three months, Cillooley has also begun experimenting with decorating glassware. Compared to working with clay, the process is simpler: Cillooley first uses a gold metallic outliner to draw out her design, then fills the sections with other colors using paint.

“I have fun with each piece,” Cillooley said. “I get bored quickly, so I’m glad polymer clay allows me to have fun and make such a variety of things.”

Watercolor artist Kay Duffy has been painting for over 50 years. This year, she selected several 2 by 3 feet paintings of blossom trees, most of which she made en plein air, or painted outdoors, around Saratoga and Stevens Creek.

Initially inspired by a need to get out of the house and spend some alone time without her kids, Duffy now travels around the globe to places like France and Egypt to find new scenic subjects for her paintings.

“I enjoy painting outside for the fresh air and sunlight,” she said. “I’m a fast and sloppy painter. It doesn’t take me long — a couple hours to paint outside, and then I set it aside and work for another half an hour inside.”

Originally from New York, Duffy moved to Saratoga in the 1960s and has lived here for over 60 years. Although the pandemic forced a temporary pause on community events like these, she said she is glad to get out and sell her paintings again.

Besides Cillooley and other craftspeople, spokespeople from several organizations also set up tents along the Heritage Orchard, introducing their work through flyers and other activities.

“Writing Chinese calligraphy allows people from different ethnicities to understand our philosophy as Chinese Americans,” Lu said in Chinese. “This festival offers a great platform for people to explore the crafts and traditions of a variety of cultures.”

Lu is a former board member and current lifetime representative of OCAW, which was established in 1977. She said OCAW’s mission is to advocate for the liberty, equality and needs of Chinese and other Asian Pacific American women by improving their educational and social opportunities.

This was the OCAW’s second time at Blossom Festival, and it presented activities like calligraphy, decoupage — the art of decorating an object by pasting paper cutouts onto it — and other traditional crafts for attendees.

OCAW has also actively participated in other local events, such as advocating for environmental awareness by hosting events at beaches, attending events for the disabled community and inviting police officers to describe their experiences at community events. They have also actively sought to  encourage youth to speak up about their identity concerns in order to eliminate racial and cultural misunderstanding.

“As a Chinese teacher, it’s my duty to tell my students that, once you participate in community events like these, the community becomes a part of your identity,” Lu said in Chinese. “For example, we learn Chinese to get more in touch with our roots; only when our roots become cemented can we start giving back to our wonderful community.”

She used an analogy comparing the community to soil and the process of maturing into adulthood as growing into strong trees: According to Lu, everyone has a duty to enrich the “soil” with their unique cultures — the richer the soil, the stronger each “tree” can grow.

Lu encourages others to attend community events like these to “get more involved and discover the strengths you can bring to your community.”

Close by to Lu and the OCAW, lead singer Caroline Garbarino and guitarist Charlie Perkins, the duet representing the Celtic Harmony Band, strummed along to soft Celtic and American Folk songs under a tent in the orchard.

While band members have come and gone in the past 11 years, with some having played the fiddle, hammer dulcimer, banjo, mandolin, guitar and drum, Garbarino said she is happy to perform after being unable to do so during the previous two years.

“At festivals like this, we strive to bring the authentic music of Ireland, Scotland, England, Wales and Cornwall, as played by our Celtic ancestors,” Garbarino said. “We continue to create original Celtic-inspired sounds.”

Aside from craftspeople, musicians and organizations, the Blossom festival also hosted actors and actresses who dressed up as famous Saratoga historical figures such as Julia Morgan, the Hearst Castle architect who designed the Saratoga Foothill Club; Isabelle Blaney, a Saratoga resident who was active in progressive politics and the women’s suffrage movement; Paul Masson, who founded The Mountain Winery in Saratoga, which now serves as a center for events and conferences; Martin Ray, who was mentored by Masson and later founded the Martin Ray Vineyards and Winery near Santa Rosa; and Senator James Phelan, who created the Montalvo residency in 1912. Attendees could stop actors and actresses to ask questions and learn about the historical figures of Saratoga.

This year marked Patt Martell’s fifth year playing the role of Sarah Brown, the daughter of famed abolitionist John Brown, who led a raid to liberate enslaved people during Bleeding Kansas, a period of violent warfare over the legality of slavery in the newly-created Kansas Territory in 1854-1859. When John was tried for treason following his raid on Harpers Ferry, his family — consisting of his wife and children — moved west. Intrigued by the beautiful weather, the family settled in Saratoga in 1881. Sarah became an artist and orchardist, employing many Chinese immigrants and teaching them to read and write in English. Sarah died at age 70, and she and her sister can now be found in Saratoga’s Madronia Cemetery.

Martell said her favorite part of portraying Sarah Brown was interacting with festival attendees who “actually cared to ask you to stop.”

“Most of the time people just cruise around, look at you and go. They don’t have enough interest to ask questions,” Martell said.

Martell said what initially drew her to the job was her long-time involvement with Saratoga, despite not living in the city itself.

“I used to be the president of the Saratoga Chamber of Commerce, so I did a lot of things for Saratoga and in the name of Saratoga. I also worked in downtown Saratoga for 20 years,” Martell. “This is like my second home. It’s my soul.”