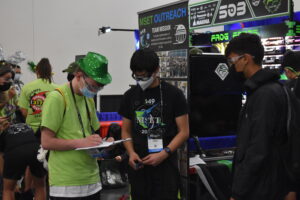 robotics
MSET Fish and MSET Cuttlefish competed at Houston from April 20 to April 23 during the FIRST Robotics World Championship.

The FIRST Robotics Competition (FRC) team, 649 MSET Fish, along with one of the three FIRST Tech Challenge (FTC) teams, 6165 MSET Cuttlefish, competed at the FIRST World Division Tournament at the George R. Brown convention center in Houston. This year marks the sixth time MSET Fish and the second time MSET Cuttlefish have attended the World Championships, with the most recent time being in 2019 before the pandemic.

A total of 52 students from the school attended the global competition: 38 students from MSET Fish and 14 students from MSET Cuttlefish. Additionally, eight mentors and seven chaperones accompanied the team to Houston. Altogether, the event saw a grand total of nearly 800 teams from 43 different countries, and attracted over 30,000 viewers.

Both MSET Fish and MSET Cuttlefish placed within their respective semifinal brackets. MSET Cuttlefish got eliminated in the playoff rounds as a part of the second place alliance.

MSET Fish placed within the top 24 out of 75 FRC teams, and were part of their division’s 5th place alliance. However, they lost in semifinals to the team that would later go on to place second in the entire competition.

Senior team lead Arya Vasani of MSET Fish attributed the team’s strong comeback to diligence and focus gained over the previous year. As compared to the 2022 season, the 2021 season ran at a slower pace. However, he said the team took initiative to train and familiarize underclassmen, which greatly boosted their performance and technical skill this year.

“We still kept going strong during the pandemic and have some very dependable underclassmen who learned a lot last year and were ready to hit the ground running this season,” Vasani said.

Going into worlds, Vasani said the team had the primary goal of garnering experience and learning rather than purely focusing on the results.

“FRC is very competitive and unpredictable so you’ll never know if a team might win or if something will break on a robot,” Vasani said. “It’s best to focus on something that’s guaranteed and that’s the fact we’ll be meeting the best teams from around the world who all have things we can learn from.”

Though they started off strong, they soon found out that their match schedule was not very powerful: Towards the end of their qualification match schedule, the team found themselves partnered with low-caliber teams and matched against higher-performing ones. This forced the team to alter their strategy towards a more supportive role so that the top teams would consider them during alliance selection. Instead of being the main team who scored a bulk of the points — something that they had done during their last two regional tournaments — the team decided to take on a more defensive role.

This decision placed the MSET Fish at rank 20 among 75 teams in their division, allowing them to move on by playing in the elimination matches the following day.

During the eliminations, sophomore hardware lead Naveed Kasnavi of MSET Fish noted that most of the machinery ran quite smoothly and no major issues were encountered on the hardware side thanks to the team’s tried and tested design.

However, one minor hiccup the team faced was during the game’s “monkey bar” challenge. As part of the challenge, teams aim to traverse a set of rungs with their 100-plus pound robots suspended in the air while latching on with various contraptions built during the season. During their last regional competition, MSET Fish’s robot was able to successfully hang on the tallest rung. However, at Houston their hang mechanism broke, leaving only one bar of support for the 125-pound robot and bending the remaining arm as a result.

Luckily, the team had prepared for any possible mishaps and had parts on hand to repair or change components of the robot. The pit crew, consisting of the drive team along with specific members who have worked with the robot closely, immediately took action, bolting on a new set of arms.

“We basically tossed all the spare components and tools we could find into a 30 by 30 by 30 crate and hauled it to Houston,” Kasnavi said. “I bet we could probably create a second functioning robot if we wanted to.”

Senior software lead Shreyas Rana of MSET Fish mentioned that another minor challenge the team faced was with the camera detection module of the robot. Because the convention center in Houston was brightly lit with large LED lights dotting the entire ceiling, the camera struggled to identify certain field objects.

“The environment proved a slight challenge particularly due to the bright lights scattered throughout the ceiling which threw the camera sensors off,” Rana said. “We brought the robot in and recalibrated it to match the lighting and everything ran smoothly after that”

Freshman Beverly Xu, the coach for the drive team of MSET Fish, had to adapt to the loud setting of a typical competition. With the San Francisco Regional being her first regional competition, she was unable to communicate effectively with Kasnavi, the team’s robot driver.

Xu mentioned that, as a freshman, she was extremely surprised yet excited to be able to attend worlds in her first year in robotics, and she feels that the underclassmen are extremely motivated to continue this season’s stunning success in the coming years.

“I think the team is extremely high-spirited right now, and the seniors did a great job of teaching us step by step,” Xu said. “We have a lot of potential going forward and we’d like to be back in Houston next year.”

Vasani also noted that one crucial aspect of the team’s success over the course of the season was the cooperation shared between the more experienced upperclassmen and the more participatory underclassmen.

“I’m satisfied to see that this is how my FRC career ends and can’t wait to come back as an alumni to see the club’s continued growth,” Vasani said. “It may take a while, but Saratoga is going to win the world championship one day.”