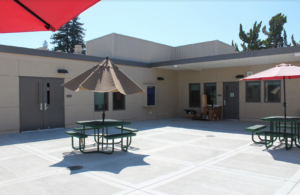 After entering the robotics room on a rainy day in December 2019, team members were unsurprised to see the pool of water that had collected in the middle of the floor. For years, leaky roofs, a lack of space and poor insulation, among other problems, were unfixed due to a lack of funding — until the construction of the new robotics buildings began in 2020.

Funding came from Measure E, a local general obligation bond that raised $99 million in 2014 for use in campus improvements at both Saratoga and Los Gatos High Schools. Over the years, Measure E funds have been used to build the music building, renovate the basketball courts and construct the Wellness Center, among many other projects.

Some of the changes the 900 wing underwent under Measure E include upgrading the HVAC system, adding a working sink and built-in cupboard, beefing up insulation, expanding whiteboard space and constructing new double doors.

Though the square footage of the 900 wing remained the same, many of the staff and students are reacting well to the renovations.

“I’m excited that students have a nicer place to enjoy and work,” said parent Sheeba Garg, a longtime adviser to the robotics club. “All the upgrades are great and I’m looking forward to this coming year in our new space, with students back in the room again.”

Another perk of the building changes is that all four robotics teams are now able to work in one large space instead of in different rooms around the campus, making it easier for students to collaborate with other teams, leading to a sense of community within all five MSET teams.

The accompanying building that used to be used by robotics to store the field has been converted into a science classroom.

Despite the upsides of the Measure E renovations, the transition from a year of virtual meetings and temporary accommodations to in-person meetings at a stable location will take some time for students to adjust to. For example, students will need to make some adjustments to their work habits, while advisers need to ensure all students are following the proper safety guidelines at all times.

Nonetheless, club members have been reacting well to the improvements.

“The new building is a really awesome privilege to the team, and the renovations were really thought out well in terms of making the best workspace,” club president Sajiv Shah said. “Having our own dedicated space is a huge benefit for the robotics team, and the walls aren’t falling apart anymore.”