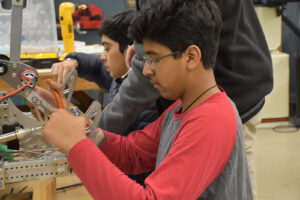 Members of MSET work in the robotics room in early February.

Seniors with lead position experience hope to a high ranking in the FIRST Robotics Challenge.

The build season of the FIRST Robotics Challenge (FRC), which kicked off on Jan. 5, will come to a close on Feb. 19.

Ever since the early-January release, team members have been working to finish building their robot, Nigiri. Since the team’s name is MSET Fish, the name of the robot was chosen to be a type of sushi made from raw fish over vinegared rice.

Once the build season is over, the team will no longer be allowed to access their competition robot. As such, the team has simultaneously been building a duplicate robot to use for code testing after the build season is complete. The remaining time before their first regional competition at San Francisco, which will take place from March 14-17, will be spent programming the robot to complete various tasks.

In the ensuing four weeks before the actual competition, all programming, tuning and testing of robot code on the duplicate robot will have to be completed. Important tasks for the team include implementing an autonomous routine, adding more controls for the robot drivers, and calibrating important sensors.

Although the tasks that the team must design their robot to complete are relatively simple compared to previous years, according to club president senior Bassil Shama, the platform climbing poses a challenging obstacle. The climb itself appears difficult based on current prototyping efforts but at the same time yields massive point benefits.

“There’s always a climb aspect, but this time it is hard and important; oftentimes it’s only one of the two,” Shama said. “I think it’ll definitely be the distinguishing factor between good teams.”

In order to stand a better chance at mastering the tasks of this year’s game, the robotics team has implemented various changes. Specifically, a larger emphasis has been put on being involved during the season, with attendance being taken at every meeting to determine eligibility for going to tournaments. Getting more team members involved in the robot design ultimately allows for a more effective club environment.

“We want to make sure people who come and represent our club and school at competition are knowledgeable about our robot,” Shama said.

Another change has been to prototype various designs for different robot components at once. Groups of three or four team members were assigned specific designs to prototype and test, allowing the team to experiment with various options and choose the most effective one.

Documentation has also become increasingly important, with notes being taken on every aspect of the design process, from prototyping to vision (detecting targets with a camera).

Many seniors this year had experience in lead positions in previous years: Shama, for example, was the software lead last year. In 2016, the robotics team was in a similar situation with many experienced seniors and ultimately created a robot that performed extremely well at competitions, allowing the team to place higher than in other years.

“[The seniors] get to apply all that stuff we learned last year,” Shama said, “so I feel like our team is definitely really strong this year.