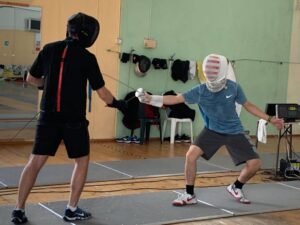 Photo by Untitled
Senior Jason Chin (right) trained with his coach (left) during a fencing camp in Italy he went to in 2019.

Athletes nationwide have seen their dreams of playing college sports become less likely in the months since the pandemic hit and recruitment became difficult or impossible.

Senior Jason Chin — an internationally ranked fencer — has been one of the lucky ones. When the pandemic hit in March, Chin had already secured the interest of a fencing coach at the University of California San Diego (UCSD) and verbally committed to the school in June. At UCSD, Chin plans to study nanoengineering along with pursuing his fencing career.

Even with restricted online contact with college coaches, Chin, an 11th place winner out of 270 fencers at the 2020 international CEP Paris Marathon in February, was determined to aim for college sports recruitment.

“I know that academically, I am not as capable and competitive as others, especially those that are applying to the schools that I was looking at,” Chin said. “I’m not saying that I’m fencing just to get into college, but it is certainly helping me significantly.”

Without coaches watching in-person matches, it would be difficult for them to evaluate fencers. Luckily for Chin, he had all of his recorded bouts and could easily send them to coaches. Chin’s fencing career has taken a hit in recent months. He had to pause his fencing practice at Silicon Valley Fencing Center for a month before continuing on Zoom with his coach and team. Chin’s physical conditioning also suffered.

“I used to go to the gym three, four times a week, and that was a huge part of injury prevention,” Chin said. “Now that that’s gone, I can still do bodyweight workouts, but to me, they’re really not as effective as having the weights.”

After being in quarantine for three months, Chin moved back to in-person fencing with restrictions such as wearing face masks and social distancing in July. Even though Chin is back to fencing with his teammates, he still misses the diverse fencing community he would meet during tournaments.

“The fencing community is really small, and everyone knows basically everyone, so you make friends even across the country. It’s a great thing,” he said. “I miss the bonding and the tournaments.”

Optimistic for the future, Chin said he aims to be more consistent with his fencing in higher level competitions, stay healthy and avoid injury, fine-tune all the technical details during practice for increased consistency and adopt more positive self-talk.

Although Chin is currently looking forward to competing again, he is wary about the certainty of tournaments next year.

“The next tournament that I can participate in will be held in February, but I am not optimistic about that because it’s highly likely that it will get delayed, and eventually canceled,” Chin said.

Even with setbacks like this, however, Chin’s UCSD acceptance gives him hope that he can continue to overcome the challenges of being a D1 student athlete.