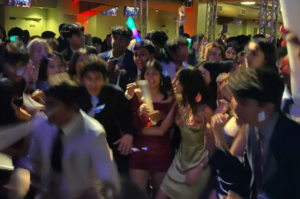 Photo by Michelle Wan
Students dance together in the small space provided.

Permalink
This year’s event sported a small room with bland food and nothing much more.

The annual Winter Formal offers the chance to meet friends and enjoy gourmet food, high fashion, great dancing and memorable experiences. This year’s event on Dec. 10 was expected to be particularly exciting because of its venue at Great America, an amusement park with exhilarating roller coasters, holiday WinterFest decorations and an ice skating rink. However, constant rain showers caused park officials to shut down the rides, creating an anti-climatic event that became memorable for mainly its subpar food, overcrowded conditions and tasteless music.

The rain persisted throughout the night, confining students to the small room in the pavilion area. As the minutes ticked by, there wasn’t much to do. The motivation behind holding this year’s Formal at an amusement park was lost the moment it was announced that the rides were off limits. Many resorted to walking in laps around the indoor venue, which is dismal in comparison to the prospect of roller coasters.

It didn’t help that the food was nothing more than mediocre, stereotypical American fare: unseasoned mashed potatoes, slices of stringy beef and brussel sprouts that were burned to charcoal.

Not only was there bland ambiance and poor food, but the music played throughout the first half of the event made many students’ ears feel as if they were bleeding. Truly, who in the world plays EDM rave music at a high school’s Winter Formal? The constant bass of the House music and monotonous beats of unpopular songs drowned out all attempted conversations between friends and dates. Many students tried making excuses to leave the venue, but their efforts were proven futile as they were mandated to stay until 10:30 p.m.

Compared to last year’s Formal at Gilroy Gardens, Great America was a disappointment. At Gilroy, students were allowed to wander the park — they could enjoy the beautiful Christmas lights and family-friendly rides around the park. Gilroy also offered a decently sized ice skating rink in the nook of the entrance, unlike Great America’s false advertisement of one. Last year’s venue was significantly more aesthetically appealing, with the well-decorated greenery serving as photogenic backdrops for pictures and vlogs.

Great America lacked the proper decorations and freedom of wandering around that Gilroy Gardens offered. Students were either confined to the same tight room cluttered with round tables and chairs or the dark, cold empty space outside, wet with intermittent rain. Security officers monitored the only known exits, causing the outside space to feel like a prison rather than a formal event. Others shambled outside to avoid the blistering music, only to return back inside due to the rain. And after a couple hours of shifting through doors, being there got pretty tiresome.

Most of this disappointment goes back to the unfortunate rain. If this year’s Formal had offered rides, we probably wouldn’t have cared as much about the disappointing food and pavilion room. But since there weren’t any, the value of the location was ultimately lost.

We would have rather attended Winter Formal at a well-decorated part of our school campus serving delicious food, playing smooth music and providing open spaces for a wealth of activities.

We do feel that the school adequately reimbursed us, however, with the Great America tickets that allow us to attend the park again on our own time. This will make us feel much better about ticket prices that ranged from $70 to $90 .

Although we commend the hard work put into it, we desperately hope a rainstorm does not ruin the fun of next year’s Winter Formal or a venue could be picked that doesn’t depend so much on having good weather.