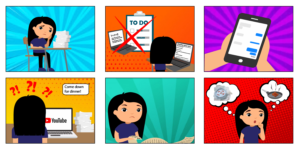 Last year, I wrote a 1,500-word speech for speech and debate addressing reasons procrastination is detrimental both to the health of individuals as well as society at large. Ironically, I still find myself procrastinating every day, on practically every assignment.

While this story is in no way encouraging you to neglect the 2,000 assignments that your teachers have tasked you with completing, note that I’m writing this while staring at the massive pile of unfinished homework accumulating on my desk.

As your average Saratoga kid, I can’t help overachieving; even when I procrastinate, I’m still productive (sometimes). When my teacher assigns an important task I don’t want to do, I do anything else I can think of first. While this seems like I have terrible prioritization skills, I like to think of it as productive procrastination. Sure, I’m avoiding the awful, horrible 200-point analytical paper that’s going to have a significant impact on my grade, but at least I completed my 5-point EdPuzzle assignment.

Before quarantine started, texting and calling was my go-to procrastination technique. Then, an entire year of quarantine stripped whatever social skills I previously had.

There have been far too many times in the middle of an actually decent conversation where I’ve changed the topic randomly, followed by three dots and no response. Turns out, I’m an expert on being socially awkward.

After 25 minutes of working on math homework (20 minutes of just me staring at it), I’ll feel so accomplished for finishing a problem that I’ll reward myself for all my hard work with a short break, as per the Pomodoro technique. Who would’ve thought I’d actually learn something from those Wednesday HAERT modules?

I surf through YouTube and find something interesting to watch — and it’s below five minutes, perfect! But then I’ll find another interesting video as I scan the sidebar, which quickly becomes two, which piles up to three, and so on, until I hear my mom calling me downstairs for dinner and realize that five hours have passed without completing any work or studying for tomorrow’s chem test. Let’s just say that I’ve procrastinated on telling my parents about how that test went.

Most of the time, I just procrastinate by going on my phone and scrolling through social media, mainly through Instagram’s Explore Page, and seeing a post of one of those trending lunch box cakes, so I click on it to get a better look, which led to many, many similar posts.

After seeing so many of them, I have the bright idea of trying to bake one myself. Although I’d love to say I actually attempted it, I realized I have absolutely no idea how to bake. The closest I’ve gotten was a sixth-grade summer cooking class, where I set off the fire alarm by burning a slice of french toast. My family should be thankful I decided to stick to only watching videos of other people baking rather than attempting it myself.

One time, I tried to make a to-do list of all the things I had to get done that ended up being very long. I guess trying to force myself into being productive by listing the things I had to do ended up back firing, as all I did was stare at the list for half an hour, get stressed and ironically procrastinate by deciding to do the work at a later time (much later).

Although I did tons of research on procrastination last year and acknowledge the many reasons it is bad, I can’t help but continue to guiltily do it. I was going to write a conclusion for this story, but I guess I’ll just get back to it later.