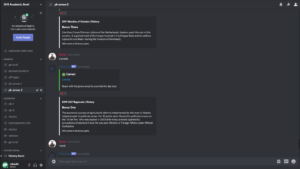 The Quiz Bowl A team qualified for nationals by tying for third place in the competitive division of the California Cup 1 tournament on Nov. 14.

In Quiz Bowl, competitors buzz in as quickly as possible to answer questions on history, literature, science, current events and more based on clues of decreasing difficulty. The Saratoga High team has been having weekly practices over Zoom and Discord, during which they read through Quiz Bowl packets online and do practice questions.

Despite losing three skilled seniors from last year who had made up the A team since their sophomore year, the team was still able to qualify for nationals.

“I’m pleasantly surprised by how well we performed,” Kumar said. “I didn’t expect to live up to last year, but we somehow did.”

Last spring’s  tournament was canceled due to COVID-19.

Two years ago, the school’s team placed in the top 20 at nationals.

The 2021 High School National Championship Tournament (HSNCT) will be held online from May 28 to May 30, according to the National Academic Quiz Tournaments (NAQT) website. Around 300 teams will compete in the championship, although the number is subject to change due to the uncertainty over the pandemic.

The novice team’s accomplishment was especially impressive since there were 20 teams in its division, and all members of the team were completely new to Quiz Bowl.

“It’s good to see that even though everything is online, we still have some super strong newcomers,” Kumar said. “I’m pretty proud of everyone, and I’m sure we’ll keep getting better as the year progresses.”