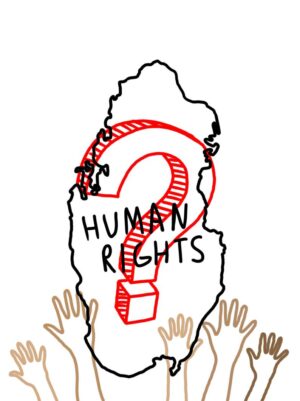 Photo by Eric Shi
Qatar has endured a lot of scrutiny; however, this World Cup has been a success.

Permalink
Although Qatar harbored a plethora of reservations aimed their way in the buildup to the 2022 World Cup, this year’s tournament has been nothing short of awesome.

I love soccer. When the World Cup  rolls around every four years, I am determined to watch as much of the action as possible. With 64 games compressed in a tight 6-week span, every World Cup is filled with crazy storylines, unexpected upsets and numerous amazing goals.

However, I had my doubts before the 2022 World Cup began. I felt a pang of disappointment upon hearing that the tournament would be hosted in the winter, in the midst of college application season, which is the busiest part of my life to date. All these games would probably be happening even as I churned out college essays.

Aside from these personal factors, I was also disappointed when it was announced that Qatar would be the host. The seemingly endless controversy surrounding Qatar and its human rights issues, among a lengthy list of other matters, made me less enthusiastic than normal.

I was not alone in thinking that picking Qatar was a colossal mistake. To get the Cup, Qatar seemed to have participated in illicit bribery to win its bid — even former FIFA President Sepp Blatter said that it was a “mistake” that the Emirate State won.

Continued skepticism around human rights, LGBTQ+ liberties, the torrid weather in the Middle East and the accommodation of millions of international fans traveling to stay in Qatar riddled every conversation in the months leading up to the World Cup. Discussion over the most remotely contentious topics about Qatar and this tournament constantly arose. Widespread animosity over stadiums not selling alcohol stood out to me as one of the particularly comical complaints.

Even with all of these hesitations, I can say my long-held fears about this year’s Cup were incorrect. In fact, the 2022 World Cup has been the best I’ve ever witnessed. My personal memories of the 2014 and 2018 World Cups were characterized by innocent joy due to my lack of stress during those years.  But I didn’t focus on the quality of the soccer, goals or storyline of the games and players. I was worried that what was going on off the pitch would disrupt the momentum and hype a quadrennial event warranted.

But when K-Pop superstar Jungkook of the boy band BTS lit up Al Bayt Stadium in the center of Doha with a mesmerizing opening ceremony performance to kick off the 2022 World Cup, all of my initial concerns vanished.

The prior events to this World Cup were beyond volatile, with boycotts and protests aplenty, but admittedly, this tournament has been the most exciting World Cup yet. The skepticism surrounding it leading up to the opening match between the hosts and Ecuador seems just a distant memory now.

A couple of weeks in, Argentina — widely thought of as favorites and led by a resurgent Lionel Messi — lost to underdog Saudi Arabia in an opening match that ultimately didn’t keep them out of the Round of 16. Japan topped a group with powerhouses Spain and Germany, and Morocco advanced to the quarterfinals for the first time in history. On a local level, the U.S. was able to get out of a tightly contested group with England, Iran, and Wales, but fell short in their first knockout game against a strong Dutch team. Overall, from the quality of soccer to the shocking results and the wild narratives, Qatar has served viewers a masterpiece so far.

The concerns around the weather, the country’s size and player fatigue have been mitigated by the way Qatar has handled this World Cup.

Though Qatar is an imperfect host, the scrutiny they’ve received has been excessive. The problems that they’ve endured, particularly around the number of migrant workers who have lost their lives building stadiums, are appalling. They do have a lot of work to do regarding human rights.

However, many of the complaints being thrown at Qatar lack depth. Alcohol is obtainable around the cities, just not in stadiums. Not having hundreds of raging drunkards in and among 70,000 other soccer fans sounds pretty good to me. Wages for migrant workers who make the trek to Qatar are also life changing — so much so that thousands come every year. The weather has been more than manageable; with temperatures around 70 degrees Fahrenheit during every match, the conditions for players and fans alike are excellent. Not having to slog around a massive country like what supporters and athletes both had to do in Russia and Brazil over the past two World Cups is an added benefit of Qatar hosting this time. There’s a coziness and delightful compactness of stadiums being only a couple miles from one another.

Yes, Qatar has its issues, and they should not be ignored. However, they are a rapidly growing country that is doing its best to resolve their flaws. Qatar has promised to improve its safety and living standards for migrant workers. In fact, Hassan Al-Thawadi, head coordinator of Qatar’s World Cup commission, said there have been progressive improvements on sites with high concentrations of migrant workers for the past couple of years now.

The previous World Cup was held in Russia, and they are now boiling in heated controversy. The 2010 Olympic Games were in China, a country that is also facing harsh criticism.

We usually associate sports with an innocent love for the respective games and prideful support for our favorite players. The  higher levels of every sport, however, in particular soccer, are corrupt, damaging and fundamentally flawed. Qatar should not take a majority of the criticism for a sport that’s been embroiled in a plethora of controversy for the best part of half a century.

The Middle East deserves its World Cup. As an area with a rapidly growing passion for the beautiful game, it was only right that the Arab world got a chance at hosting the tournament. After all, pretty much every other notable region has gotten it at some point.

Audiences should enjoy the soccer being played at the 2022 World Cup while it lasts. Before we know it, this tournament that is held only once every four years will be gone. Thankfully, the next one takes place four years from now in North America with an expanded field and probably even more excitement.