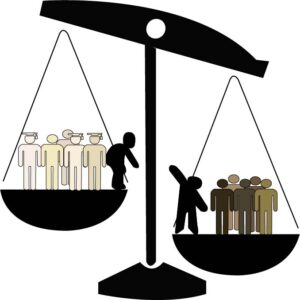 This fall, millions of Americans cast their ballots in one of the most critical presidential elections in the country’s history. Overlooked but equally important for Californians were the propositions on this year’s ballot, including the hot-button issue of affirmative action put before voters in Proposition 16.

Although the proposition was struck down by 57.2 percent of the voters while 42.8 percent said yes, even if it were any other year, I doubt the proposition’s outcome would be different.

In 1996, Californians amended the state constitution with Proposition 209, which stated, “The state shall not discriminate against, or grant preferential treatment to, any individual or group on the basis of race, sex, color, ethinicty or nation origin in the operation of public employment, public education, or public contracting.”

Some may say that affirmative action restores the right of underrepresented minorities to pursue the education they were never able to have. Prop 16 backers made it sound like the perfect idea: a constitutional amendment that would undo decades of societal and educational progress for certain minority groups, such as Latinx and Black communities.

But research reveals that Prop 16 wouldn’t have done much good, as shown by the statistics under Prop 209. According to the National Center for Education Statistics, only about 40 percent of African American high school graduates enrolled in college the year after Prop 209 passed, a decrease from 44 percent in 1996.

A 2012 article from The Atlantic also stated that as a result of placing Black and Latinx students from educational systems at colleges with higher competition, like UCLA, those students often couldn’t keep up with their peers who had received better K-12 educations. Research from labor economists referenced in the article found that Black students who start college interested in pursuing a doctorate are twice as likely to be derailed from their path if they attend a school that doesn’t match their academic abilities as they enter high education.

In light of the 2019 lawsuit against Harvard University, which alleged that Harvard discriminated against Asian Americans in their admissions, Jay Caspian Kang of The New York Times wrote that affirmative action creates racial and ethical issues in the college applications process. While affirmative action gives Black and Hispanic students a bump in college enrollments, affirmative action effectively targets Asian Americans as they hold a high percentage in population — roughly twice the rate of other races and ethnic groups — at UCs.

On top of that, because Asian Americans would have disproportionately been harmed by Prop 16, the law would only have pitted minority against minority. Prop 16’s ad, “We Rise Together,” even states that those who oppose the prop have opposed equality for years and simultaneously displays footage of neo-Nazis marching in Charlottesville, Va., — an inaccurate and uncalled-for comparison that shows how the prop would only have worsened racial strife.

Instead of playing games with representation,  addressing the actual obstacles that may have caused an individual to struggle academically and professionally creates remedies for systemic barriers.

Rather than focusing on university admissions, the state should put more effort into the base of the problem: the quality of the education students receive in K-12 schools. African American and Latinx students are disproportionately relegated to school districts that lack adequate resources to support their students.

These students also often have to support their families by working part-time jobs or by taking care of their younger siblings, obligations that prevent them from focusing on school.

Counterproductive and full of empty promises, Proposition 16 threatened to remedy injustice with still more injustice. The time has long passed for us to stop striving for surface-level equality and take action to support underrepresented minorities and address the systemic economic, educational and professional barriers they face.