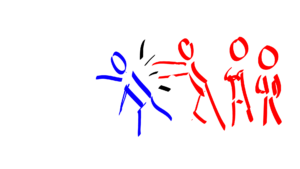 Leading up to the election, many users posted polls on their Instagram stories asking followers which political candidate they support. In some instances, people hinted they would unfollow people who chose the opposing candidate.

It’s become clear politics have begun to dictate friendships. But by being surrounded by those exclusively of a similar opinion,  discourse begins to take place for those engaging in an echo chamber, making anyone engaged unable to question their own ideas and dismissing any criticism as baseless opinion.

A Pew Research study found most Americans believe political discourse has become less respectful, fact-based and issue-focused in the last several years; another found Americans are increasingly socially divided from those of the opposite party, with Republicans and Democrats finding themselves 92 and 94 percent more conservative and liberal than their counterparts, respectively.

This phenomenon could explain the degree of division we’ve faced in recent years, as the climate encourages identity politics to gain traction. As a result, far left and right factions, such as Antifa and the Proud Boys, have become more accepted as stereotypes on either side, and the likelihood of effective discourse between opposing parties or ideologies diminishes.

But without differing opinions, diverse and representative political discussion is impossible; in this context, people tend to only truly listen to those who agree with them.

The real solution to this issue isn’t within further polarizing the two sides of the political spectrum, but rather ceasing volatile criticism as a means of legitimate debate. Listening to the other side rather than dismissing them as evil would prove to be an essential failure of democracy. If, for instance, as a nation, we were to characterize the 74 million people who voted for Trump as evil, any progress at unity in an already divided state would be futile and only worsen how divided the nation is bound to be.

Dismissing friendships on the basis of differing political opinions only worsens the nation’s polarization. It creates homogenous political bubbles around each person, limiting their exposure to differing arguments. Instead, surrounding yourself with people who respect your opinions, but differ in ideology, can help reverse the negative political culture that exists.

As alienation only leads to retaliation, people instead must strive instead to reconcile and reconnect with their opposing political contemporaries. Only then can a nation regain a unity previously lost for the length of an entire presidency.