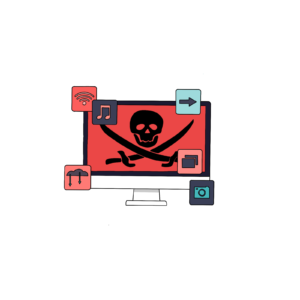 It’s no secret how much media that should legally be behind a paywall is floating around the internet.

YouTube houses two-hour long bootlegs of musicals that viewers have discreetly named titles like “Trippy Thursday,” or “Nerd kills hot dentist” so the videos aren’t taken off the site for copyrighted content. Websites like 123movies and Kisscomics, while littered with irritating “Click here!” ads, are a godsend for people who can’t be bothered to pay for a quick watch or read.

Everyone pirates or has pirated media — in other words, used or reproduced another’s work unlawfully. It’s a simple act that is looked down upon from a corporate angle, particularly in old Disney DVDs that proclaim “piracy is not a victimless crime.”

In and of itself, Piracy is not inherently a bad thing. While it may have originated as a way for greedy consumers to take money from bigger creators, nowadays it gives art back to its biggest patron: the people, especially young people like students who may not have the money to spend on entertainment.

“Trippy Thursday,” a bootlegged YouTube video of the broadway musical “Freaky Friday,” exists because musicals, in all their Broadway glory, cater to a rich, elite audience. The bootleg version makes it inaccessible for people who don’t have $150 to easily spend on a ticket.

Capitalism in media has reached an epitome with Disney, which as of late owns ABC, ESPN, Touchstone Pictures, Marvel, Lucasfilm, A&E, The History Channel and more. Yet, they still bandwagoned off other streaming services’ successes by creating Disney+, which has the feature of releasing episodes one week at a time to ensure that patrons don’t take advantage of the seven-day trial period to binge everything and then delete their accounts.

People should not feel guilty anytime they watch high-grossing movies for free online. Being potentially fined for this “crime” is only distressing because of the prospect of a company like Disney knocking down the doors of an individual person for a victimless crime. Thankfully, this circumstance is highly unlikely.

Pirating also allows consumers to experience media without supporting its creator. It’s not a crime if someone downloads a PDF of “Harry Potter” if they don’t want to endorse J.K. Rowling’s transphobic beliefs.

In bringing high-priced media to people who can’t pay for it, pirates also inadvertently raise the price of the content they make free. Companies will continually increase the cost of their products if they know potential customers are getting it for free. If companies wish to prevent pirating, a better solution would be to lower the prices instead. Costs force young consumers to pirate.

While it’s enthralling to say “down with the bourgeoisie” when pirating, consumers cannot forget the pros of the free market for independent creators, which is where the line should be drawn with piracy.

Artists like novelists, comic book illustrators and those working at literary magazines or other small businesses are more often than not poorer than the people who buy their products; they should not have to deal with people looking to take advantage of them by stealing their art for monetary gain or social media followers. They don’t usually have as much power as Disney does to advertise themselves. Pirating indie works directly lets creators know that their art is not worth paying for.

Many websites like Vk, Mangarock and Etsy, list media by independent creators, taking ad revenue while not giving a cut to the artists themselves. Such sites should be reported.

Elitized media companies make entertainment geared toward people with money. They don’t have the right to get angry when their products are put up free online for the public to see. However, it’s natural for indie creators to feel wronged when their individual work is put up for public theft. Piracy is often a victimless crime. It just needs to be recognized when it isn’t.